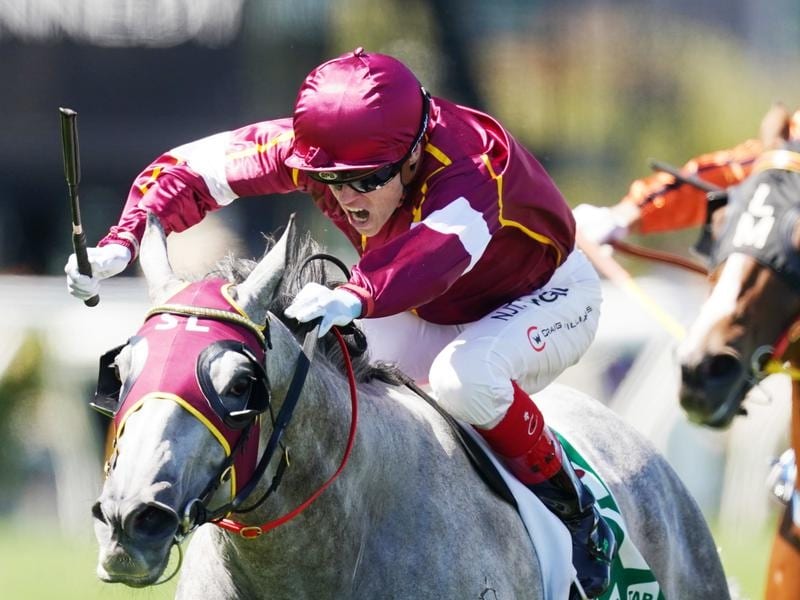 Greg Eurell has his eyes on one of Australia’s toughest handicap races after Blazejowski staged a fighting victory at Flemington.

Blazejowski will be given a short break after his victory in Saturday’s Group Three Shaftesbury Avenue Handicap (1400m) and set for the Stradbroke Handicap at Brisbane’s winter carnival.

Ridden by Craig Williams, Blazejowski ($3.20) scored in a three-way finish by a long neck from Morvada ($3.40), with the $2.50 favourite Age Of Chivalry a head away third.

Eurell said Blazejowski would have a break of three weeks before being set for the Stradbroke Handicap (1400m) at Eagle Farm in June.

“We’ll put him away now and see if we can have a go at it,” Eurell said.

“He’s dynamite over 1400 metres so it’s his right race and he likes soft tracks, so it won’t matter what is presented up there and you know you’ll be in with a fighting chance.

“He won’t have long out as he has to wind back up and get going again.

“He’s had three runs this time and hasn’t been hard on himself and with the grass up to your knees, he’ll enjoy that.”

The victory brought up a double for the Eurell stable following the debut win of Ilovemyself in the Listed Very Special Kids Plate.

The double came at the meeting Apache Cat provided Eurell with one of his proudest moments when successful in the 2006 Australian Guineas.

“It’s great. The team we have at home work very hard and it’s nice to see them rewarded today for that work,” Eurell said.

Apache Cat, a resident of Living Legends near Melbourne airport, was paraded on-course at Flemington prior to Ilovemyself’s victory.