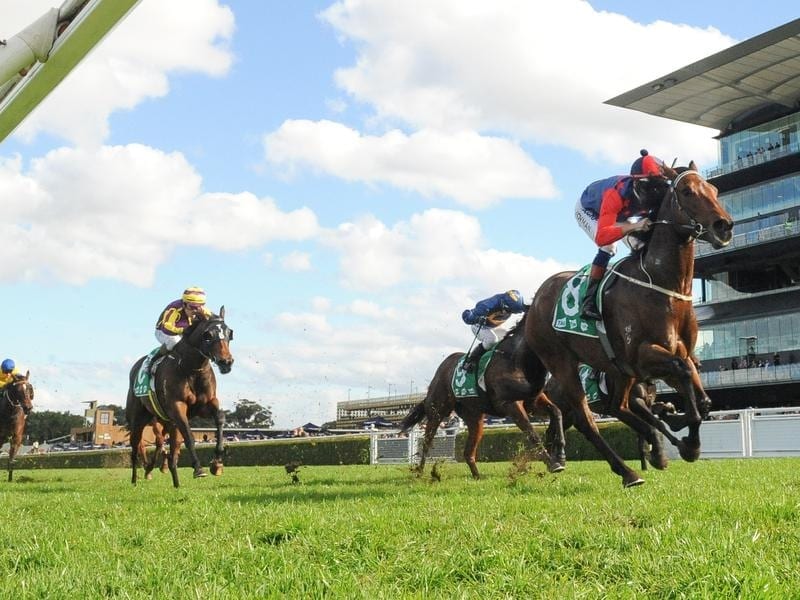 Winter star Sir Elton will have the final start of his campaign when he runs at Randwick.

Trainer Adam Duggan will not be tempted to rush promising sprinter Sir Elton into a late-spring campaign, even if the horse maintains his perfect record at Randwick.

Duggan has confirmed Saturday’s Book Spring Hospitality Handicap (1200m) will be the three-year-old’s final start this preparation before he is spelled.

And he plans to give the horse a decent break with a view to his longer-term future.

“I’m not going to get too cute in terms of giving him a short spell and aiming at the end of the spring. I’m going to give that a miss,” Duggan said.

“We’re completely in at the wrong time and I want to make sure we do the right thing with him.”

With the spring carnival off the agenda this year, Duggan’s immediate focus is on Saturday and Sir Elton’s quest to remain unbeaten.

The horse has been one of the finds of the winter, scoring a brace of impressive wins on the provincial circuit and bringing that form to town with an authoritative win on a heavy track at Randwick.

While it might be off-season form, the feedback from champion jockey Hugh Bowman has reinforced Duggan’s belief that Sir Elton can make a mark beyond mid-winter racing.

Bowman rode him for the first time last start and while impressed by the horse’s raw ability, he was particularly glowing in his appraisal of Sir Elton’s attitude.

“He was taken by his temperament,” Duggan said.

“Hugh said that usually if they’ve got some ability like he has, that his temperament for such an inexperienced horse is a good sign for the future.”

Bowman will again be in the saddle on Saturday when Sir Elton faces his toughest task yet against a field that includes Group Three winner Danawi and the Chris Waller-trained up-and-coming filly Haut Brion Her.

It will also be the first time Sir Elton has been extended to 1200 metres, although Duggan doesn’t expect the 100-metre distance rise to pose a problem.

Nor does he think the horse has gone backwards since his last start.

“I thought racing on the real heavy track might have taken a little bit out of him but I was pleasantly surprised, he bounced back from the run really well,” Duggan said.

“He looks that little bit tighter to me, but he’s still got enough condition on him.”

Sir Elton was the $1.90 favourite with TAB on Thursday, ahead of Haut Brion Her at $3 with Stella Sea Sun ($9 ) the only other horse at single-figure odds.