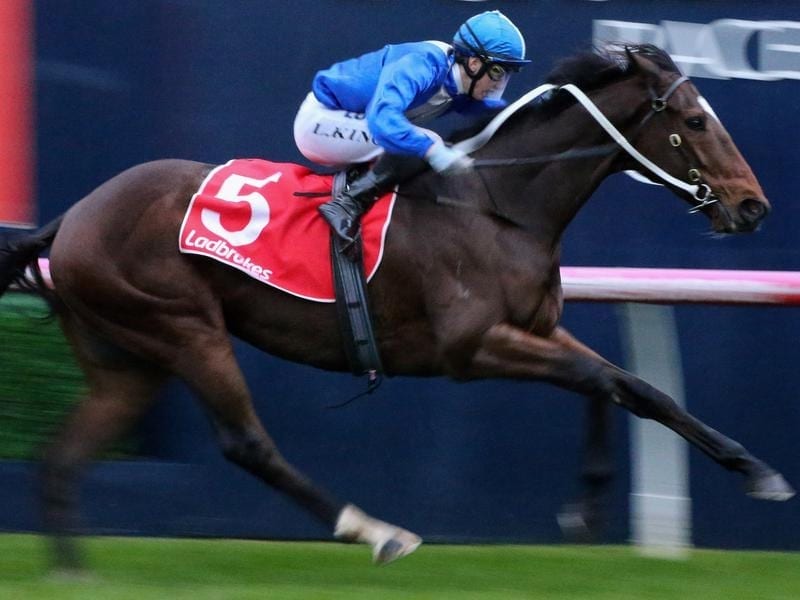 Masculino appreciated the soft conditions, scoring a win in the Ladbrokes Back Yourself Handicap.

In fading light and driving rain, four-year-old gelding Elite Drake has raced to victory at Caulfield to give Alisa Hinch her first Saturday city winner as a trainer.

Elite Drake was backing up in the Catanach’s Jewellers Handicap (1400m) after winning at Bendigo last Sunday and the $2.80 favourite didn’t disappoint in the final race on Saturday’s program, sitting outside the leader under apprentice Teo Nugent before racing to victory.

Special Diva ($20) was a half-length away in second with Miss Mandito another 1-1/4 lengths away third on the rain-affected track.

Hinch, who trains a small team of horses near Geelong and is due to give birth to her second child in about six weeks, said it was a big thrill to get her first Saturday city winner and second win in a week with the gelding Elite Drake.

“As it (the conditions) got worse we just got happier.

“I thought he was gone at the top of the straight but he’s a fighter and that’s what he does.

“He hit the line and got the job done.”

Hinch plans to run Elite Drake again at Caulfield in two weeks in a bid to continue building his rating.

Elite Drake has now won six of his 22 starts.

Four-year-old Masculino also appreciated the soft conditions earlier in the day, with the gelding scoring a front-running win in the Ladbrokes Back Yourself Handicap (1800m).

Co-trainer Mick Price said they had deliberately given Masculino a light summer campaign with a view to targeting the winter period.

Having his third start of the preparation, which included a last-start third at Flemington, Masculino notched his first win on the campaign and seventh of his career as apprentice Lachlan King carried out a pre-race plan to perfection.

Masculino ($3.40) dictated terms in front with his light weight and kicked strongly around the home turn before beating $2.30 favourite One More Try by 2-1/4 lengths with Guizot another 1-1/4 lengths away third.

“He went straight to the front and I thought he (King) rated him beautifully,” Price said.