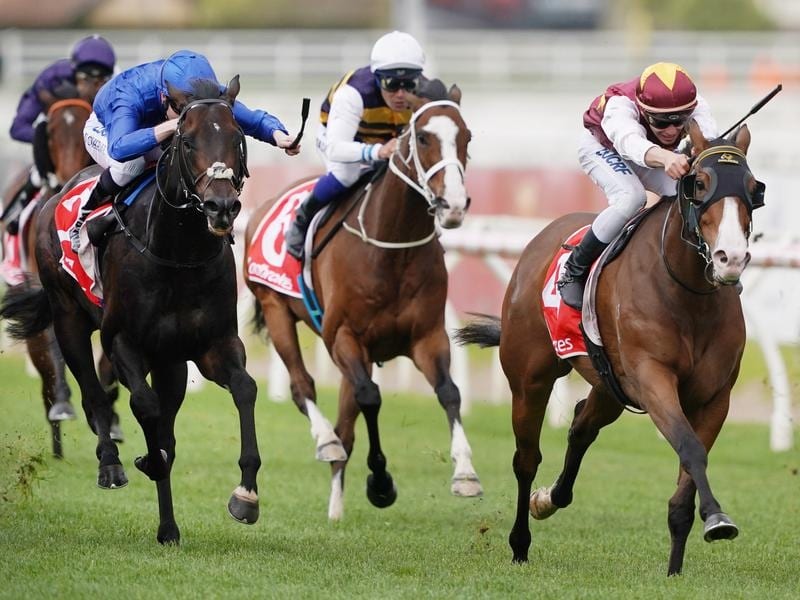 Streets Of Avalon could be headed overseas after winning the Moonga Stakes at Caulfield.

Campaigning five-year-old gelding Streets Of Avalon in Dubai early next year is a consideration for trainer Shane Nichols but first he will concentrate on the rest of the Melbourne spring carnival.

Streets Of Avalon backed up seven days after finishing unplaced in the Group One Toorak Handicap (1600m) to win Saturday’s Group Three Moonga Stakes at Caulfield over 1400m with Ben Melham aboard.

Nichols is likely to resist the temptation to step Streets Of Avalon back up to 1600m in the Group One Cantala Stakes in two weeks at Flemington and plans to instead wait another week for the Group Three Chatham Stakes (1400m).

The Sandown Stakes (1500m) a week later is another race Nichols has on his radar for Streets Of Avalon while he said the idea of campaigning the gelding in Dubai between January and March, in a range of races worth around $300,000, had been discussed.

“There’s a spread of races in Dubai for him early next year but his rating might have gone up a couple of points so it might make it a little bit tricky,” Nichols said.

“We were talking about it a few weeks ago. There’s a whole range of races between 95 and 105 ratings. There’s about six of them.

“So it was appealing for a horse like him who is really hard to place. He gets so few opportunities to win during a preparation. Today he has struck one of those races he’s been able to win.

“It’s a possibility but we’ll just see how we finish off the spring and we’ll go from there.”

Nichols said Streets Of Avalon had had a good week so he was happy to back him up on Saturday and the gelding, who started $5, was able to defeat Variation by a length with Group One-winning international visitor Royal Meeting a long head away third in his first start for almost a year.

It was his seventh win from 38 starts.

“With 58.5kg today I thought he went up another level again to win a Group Three like this.”