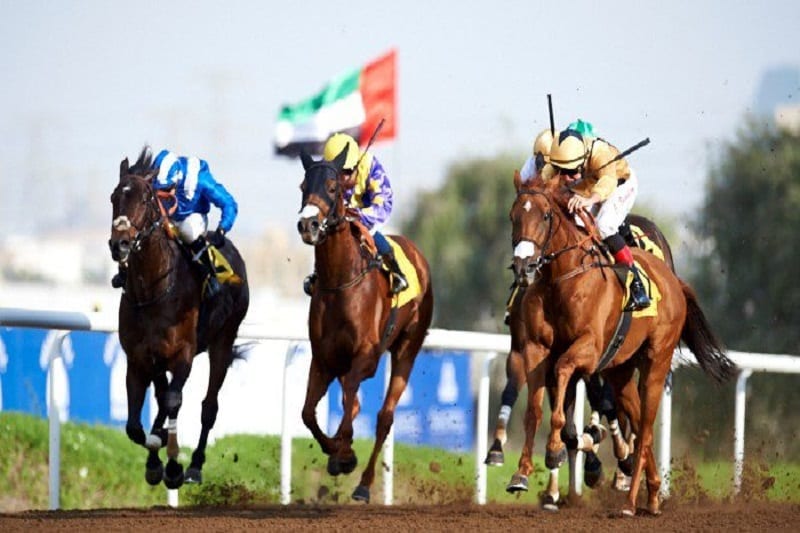 The 3-year-olds take centre stage at Friday’s penultimate Jebel Ali fixture of 2018 with ten of the classic generation declared for a 1600m conditions race in which Draco will look to build on his scintillating local debut four weeks ago.

Trained on the Jebel Ali track by Nicholas Bachalard for racecourse patron His Highness Sheikh Ahmed bin Rashid Al Maktoum, Draco and Tadhg O’Shea landed a 1400m conditions event, also restricted to 3-year-olds, on that occasion to provide the trainer a first winner since taking over at the adjacent Jebel Ali Stables.

A 3-year-old son of Astrology, Draco was making a winning local debut and doubling his career tally having landed his third and final start in his native USA. That was over 1100m at Gulfstream Park last September, but he certainly had no problems seeing out the 1400m four weeks ago.

Stable jockey Chris Hayes, who partnered Forjatt to a second National Day Cup (Listed) victory last week for owner and trainer, is in the saddle on Friday. Assuming the extra distance does not catch him out, and despite a penalty for that local debut victory, on official ratings he is very much the one to beat.

“Draco won well first time and has been in good form since,” Bachalard said. “We are looking forward to running him again but he does have a lot of natural speed, so the extra 200m is something of an unknown.”

Course and distance winner Jadir, who posted his sole career victory to date in a maiden in February on his final start of last season, should appreciate competing against his own age group after two heavy defeats in Jebel Ali handicaps so far during this campaign. Richard Mullen will be aboard the Satish Seemar trainee.

Assistant trainer Bhupat Seemar said: “We know conditions suit him and it is never easy for the 3-year-olds against their elders in those handicaps, so this race against his own age group looks a good one for him.”

Ahmad bin Harmash saddles both Rua Augusta and Sa’ada with stable jockey Connor Beasley choosing the latter, the only filly in the race, and a distant fourth in last season’s UAE Oaks (Group 3) at Meydan. She has been well beaten on both starts this season though and Rua Augusta, the mount of Pat Cosgrave, remains a maiden after 12 outings.

Bin Harmash said: “Both probably have a bit to find, but are in good form at home and we identified this race for them a few weeks ago.”

Sandeep Jadhav relies on Arroway who was in front of both Rua Augusta and Jadir in a Jebel Ali 1800m handicap won by his stable companion, the 7yo Rio Tigre. A repeat of that would make him a big danger to all, but he was very disappointing in a 1950m handicap in his most recent outing, also at Jebel Ali.

“We were disappointed with him last time,” said Jadhav of Royston Ffrench’s mount. “We are not sure why he ran poorly, but we hope he can bounce back to form.”

The 1400m handicap promises to be a cracker with several Dubai World Cup Carnival aspirants among the 12 declared which include four who won their most recent outings, three of them at Jebel Ali this season.

Seemar and Mullen combine with Above Normal, who is starting to look a course specialist with three victories and a second from six visits. A course and distance winner in March, he has landed two 1200m handicaps this season, and again returns after a four week break.

Stable companion Ejbaar, to be ridden by Antonio Fresu, ended last season winning a 1400m handicap on the turf at Jinma Lake in China. A dual 1000m Jebel Ali winner, he is owned by Mohd Khalifa Al Basti as are Rocket Power and Lytham St Annes, both succesful on this course two weeks ago.

Trained by Bin Harmash, Rocket Power receives weight from all nine rivals and steps back from 1600m, but was a 1200m Jebel Ali victor in March 2017. Watson and Pat Dobbs combine with Lytham St Annes who was opening his UAE account when scoring over 1200m.

Watson said: “He is in great form and came out of that race very well indeed, but it looks a strong race on Friday.”

The meeting opens with a second Purebred Arabian race of the current Jebel Ali season and the 1600m conditions event has attracted some quality performers among the 12 declarations. With Dane O’Neill riding for his boss, His Highness Sheikh Hamdan bin Rashid Al Maktoum, Watson saddles Foaad who is having just a second local start outside of Group Two company.

“He has faced some stiff tasks since joining us, but this looks a great spot for him,” Watson said “Hopefully he handles the conditions, in which case, he should be thereabouts.”

The previous Purebred Arabian contest at Jebel Ali was a 1200m maiden, won by AF Meghwaar with Fernando Jara riding for Ali Rashid Al Rayhi. He has since finished stone last at Abu Dhabi and his owner, Khalid Khalifa Al Nabooda, may have a more realistic candidate in AF Al Bairaq. Trained by Ernst Oertel, he is having his first start on dirt, but has kept good company on the Abu Dhabi turf, posting his sole success in 1600m Emirates Colts Classic (Prestige) in February.

Returning to action having been off since March, he has the assistance of champion jockey Tadhg O’Shea, who said: “It looks a good race, but he has been working nicely on dirt, so it will be interesting to race him on it.”