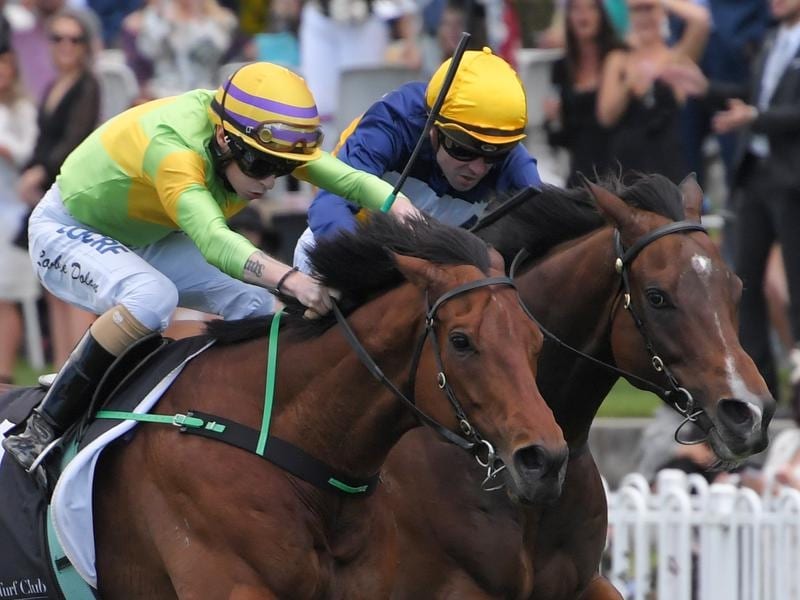 Dr Drill beat Rapido Chaparro by a short neck in the Monstar Foundation Handicap at Rosehill.

Trainers Ciaron Maher and David Eustace have again shown the benefit of having a Sydney stable, sending tough performer Dr Drill north to take out the opening race on Golden Rose day.

The English import had done his most recent racing in Victoria before Maher and Eustace found a suitable target in Saturday’s Monstar Foundation Handicap (1900m) at Rosehill.

Lumping 59.5kg after the claim of apprentice Robbie Dolan, Dr Drill ($7) conceded 4-1/2 kilograms to Rapido Chaparro ($4.20) and still proved too strong, scoring by a short neck, with another 1-3/4 lengths away to $3.20 favourite Humbolt Current.

Annabel Neasham, who runs the Sydney arm of the Maher and Eustace operation, said the stable was doing a good job finding the right horses to travel north.

“It’s been a brilliant 12 months. The young horses are going well and bringing horses up from Melbourne like this who are on-pace middle-distance horses really seems to be paying dividends,” Neasham said.

“I was worried the weight might catch him out there halfway down the straight and even towards the end but he was very tough.”

Neasham was unsure of immediate plans for Dr Drill and was ruing the decision not to enter him for next Saturday’s Group One Metropolitan Handicap (2400m) at Randwick.

She believes the horse is capable of measuring up to better grade.

“He’s not nominated in the Metrop but I’d say we’d maybe look for something a bit smarter,” Neasham said.

“This horse looks like he’s going places. He’s improving every time he goes out.

“He’s going up in the grades and he looks like he’s hopefully going to get to that sort of group level.”