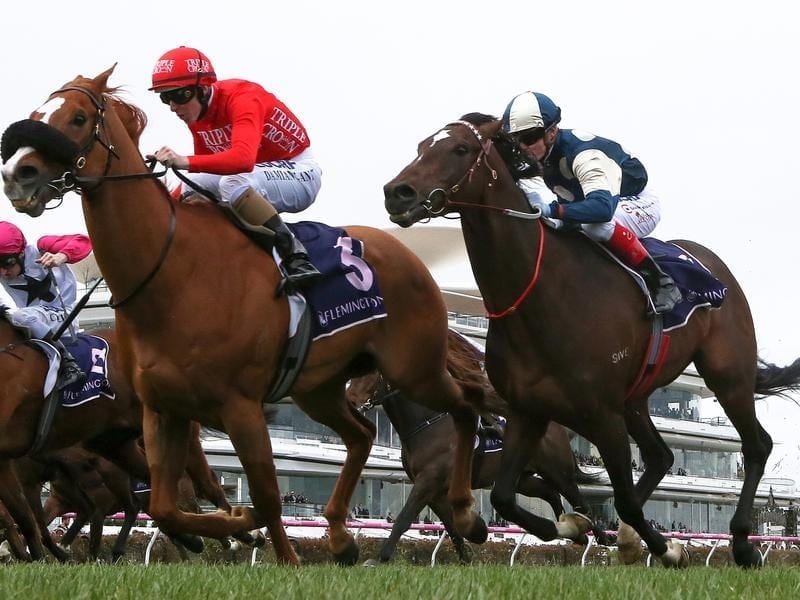 Sydney sprinter Dothraki (left) has rebounded from a first-up flop to win the Bobbie Lewis Quality.

Peter Snowden was disappointed stable star Redzel had to be scratched from The Shorts in Sydney but the trainer has still celebrated a feature sprint race win with Dothraki in Melbourne.

Redzel was taken out of Saturday’s The Shorts because of muscle soreness but Snowden is confident the star sprinter will recover quickly ahead of next month’s The Everest.

His stablemate Dothraki ($14) lined up in Saturday’s Group Two Bobbie Lewis Quality (1200m) at Flemington and got home by a short-head over First Among Equals with a short neck to Kemono third.

“I’m glad he has won but the disappointment this morning was a bitter pill to swallow,” Snowden said.

“But I’ve had a good run with that bloke (Redzel). I’ve never had any trouble with him. To have that sort of issue on the day of the race is disappointing but it’s better to be now than in a month’s time when the good race is on.

“It’s only minor. I’m hoping by Monday he’ll be fine.”

Snowden said Redzel appeared to have got cast in his box overnight.

The trainer is looking to either trial Redzel or potentially run in the Premiere Stakes before The Everest.

Snowden said eight-year-old Dothraki was a good horse on his day and was ridden perfectly on Saturday by Damian Lane.

“He just stalked the speed and waited and timed it to perfection,” he said.

“It’s good to see old horses still wanting to race and race as well as they are.”

Dothraki bounced back from a first-up failure in The Heath at Caulfield two weeks earlier.

“He raced flat but he has done that in the past and bounced off that and raced well,” Snowden said.