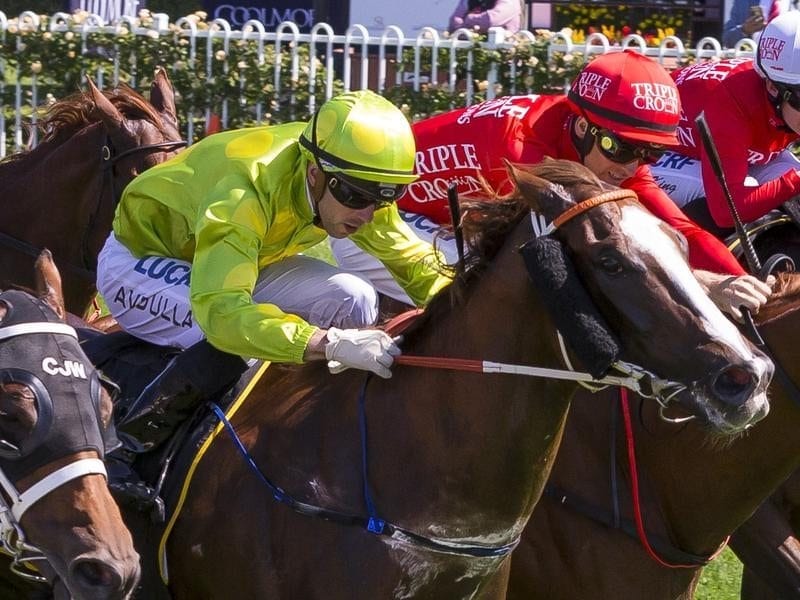 Dothraki (second from right) has won the Group Three Maurice McCarten Stakes at Rosehill on protest.

Experienced sprinter Dothraki has claimed an overdue win in the Group Three Maurice McCarten Stakes at Rosehill but not without drama.

The seven-year-old, whose previous victory was in October 2015, won Saturday’s 1100m race in the stewards’ room after Tye Angland protested against a shift out by Brenton Avdulla’s mount Sprightly Lass.

The incident happened close to the line and stewards took less than the race time of 1min03.41sec to uphold the protest with the margin between the pair a nose.

The result foiled a betting plunge on the Hawkes Racing-trained Sprightly Lass who was backed from $3.30 to $2.80 while Dothraki, who gave the mare 6kg, started at $14.

“I thought I was going to go straight past him (Avdulla) had the shift not happened,” Angland said.

“Without the interference I would have won.”

Sprightly Lass established a big lead in the race but was a target towards the end.

New Universe ($13) finished strongly for third, a half head away.

Dothraki, trained by Peter and Paul Snowden, has now won seven of his 43 starts and been placed 18 times while Sprightly Lass has only been to the races six times for four wins and two seconds.