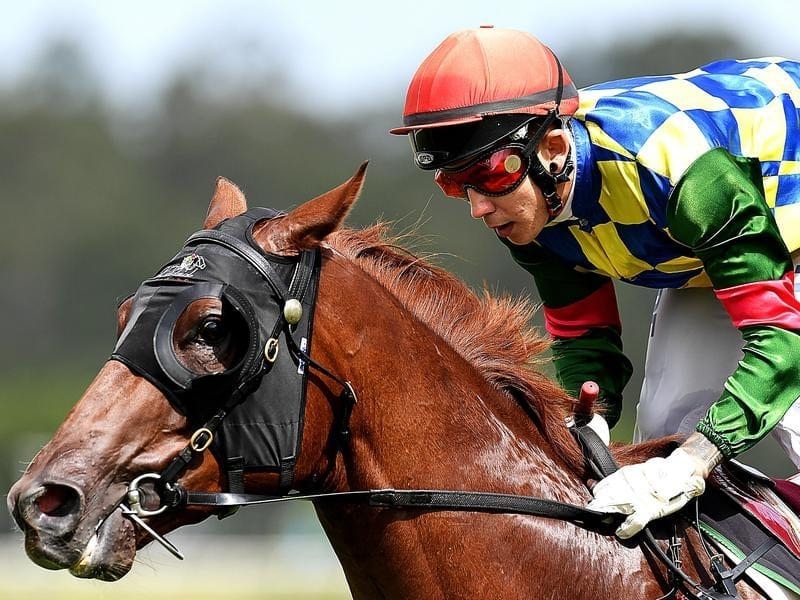 The Stuart Kendrick-trained Direct Action has defied his long odds to win in the wet at Ipswich.

Trainer Stuart Kendrick hopes the upset win of Direct Action at Ipswich bodes well for his two purchases out of the Melbourne Premier Yearling Sale.

Direct Action made a mockery of his starting price of $71 when led all the way on a bog track to win the Ray Ray Ipswich Handicap (1200m).

Kendrick paid $60,000 at an Inglis sale for Direct Action who is by top sire More Than Ready out of Absolvent, who is a half-sister to the Group Two Todman Stakes winner Krupt.

The Caloundra-based trainer arrived back in Queensland on Wednesday from the Inglis Melbourne sales to watch Direct Action win.

“I picked up a Sebring filly and a Not A Single Doubt colt from the Melbourne sales so lets hope it is an omen for them,” Kendrick said.

“I know Direct Action was well beaten his first start at the Gold Coast but that was 900 metres and he got run off his feet.

“He worked very well on Saturday morning and we will look at a city race now and especially if the rain hangs around into the winter.”

Premier trainer Tony Gollan warmed up for much bigger things on Saturday when Ponytales ($3.80) ploughed through the mud to win.

Ponytales carried the colours of the Greenup family who raced the champion sprinter of the 1990s in Chief de Beers.

The filly had been well beaten at her previous start on a wet track but the win did not shock Gollan.

“Jim (jockey Byrne) said she didn’t handle the track last start but she was a lot fitter today,” Gollan said.

“I have only had a few horses for the Greenups and maybe Ponytales can pick up an off-carnival Saturday race.”

Gollan left Ipswich to supervise his star two-year-olds Ef Troop and Outback Barbie being loaded for the trip to Sydney for their assignments on Saturday.

Ef Troop is in the Todman Stakes and Outback Barbie in the Reisling Stakes as final lead-ups to the Golden Slipper on March 24.

“I have never had a Slipper runner so let’s hope they both make the field,” he said.