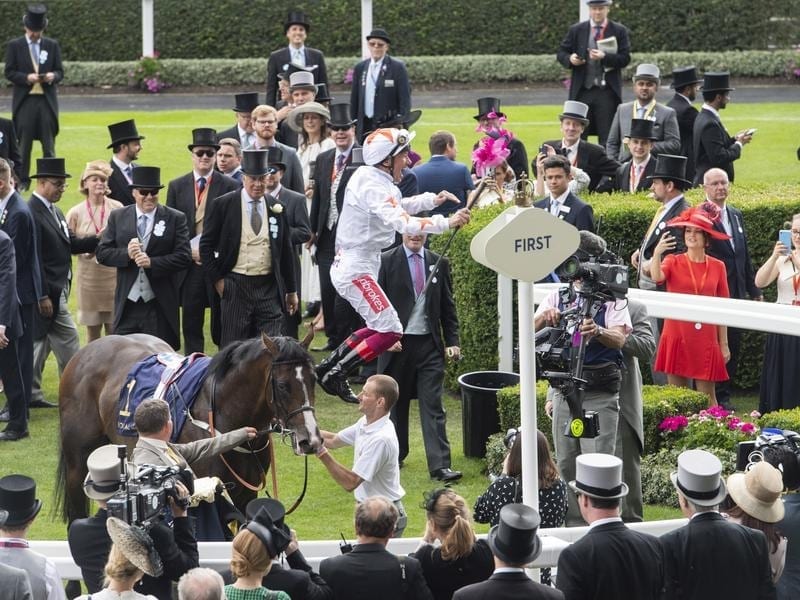 Frankie Dettori has ridden Advertise to win the Group One Commonwealth Cup at Royal Ascot.

Frankie Dettori has ridden another Group One winner at Royal Ascot, steering Advertise to win the Commonwealth Cup.

The Martyn Meade-trained colt was one of the star performers in the juvenile division last season – winning three of his five starts and finishing second in the Coventry Stakes and in the Dewhurst.

He was never a threat in last month’s 2000 Guineas at Newmarket and as a result wore blinkers for the first time as he dropped back to six furlongs (1200m).

Dettori had Advertise midfield for much of the way before hitting the front racing inside the final furlong.

“I’m so pleased for Martyn as he has been having a tough time,” Dettori said.

“He ran a stinker in the Guineas and he decided to close his stable for a month as he knew his horses weren’t right and it paid dividends.

“We were hoping and we weren’t so sure if we were out of the woods, but he put in a tremendous performance there. I was always in control. He travelled like the winner and when I kicked he went.

The win was Dettori’s seventh of the meeting which has one day to go.

The other Group One event on the program, the Coronation Stakes, was won by French Horse Watch Me who upset the favourite Hermosa.

Ridden by Pierre-Charles Boudot, Watch Me gave trainer Francis-Henri Graffard his second Group One victory in a week, having landed the Prix de Diane at Chantilly with Channel.

“Obviously we were 20-1. It’s good for me with the owner – he said go and enjoy yourself. There is no pressure. We are an outsider. If we are third that’s a fantastic result, but like last Sunday I was behind my binoculars looking at the trip she had,” Graffard said.