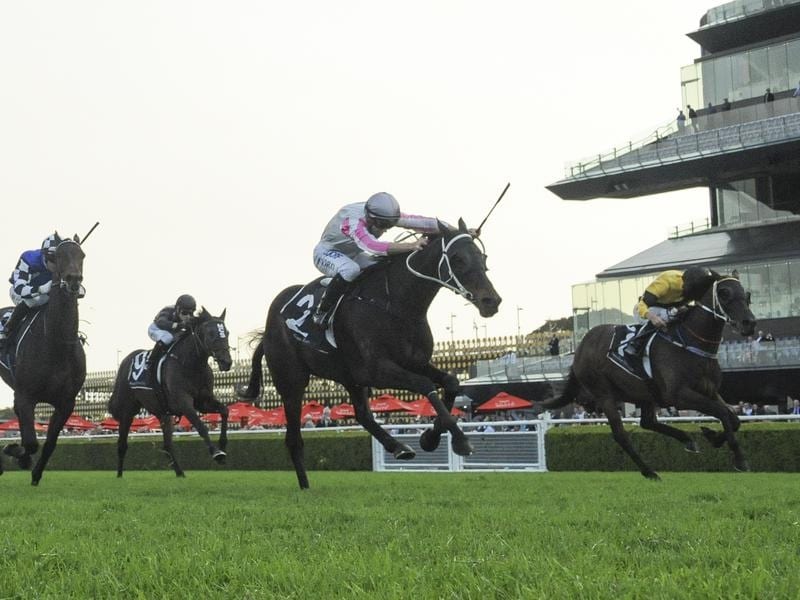 Veteran Destiny’s Kiss (grey/pink) is equal topweight for his defence of the McKell Cup at Rosehill.

Veteran Destiny’s Kiss will be striving for his first win in a year when he head to Rosehill for a defence of the Listed W J McKell Cup.

The winter staying feature has attracted 24 entries with the Joe Pride-trained Destiny’s Kiss and Home By Midnight from the Ballarat stable of Patrick Payne, equal topweights with 59kg.

Although Destiny’s Kiss and a few of the other entries would prefer a rain-softened, Sydney’s weather is predicted to be cool in the lead-up to Saturday but mostly dry.

Now a 10-year-old, Destiny’s Kiss has shown no signs he is ready to retire with Pride planning to keep him racing as long as he still shows the desire.

“He is an old marvel,” Pride says.

“He is sound and enjoys his work and his racing. I wish I had more like him.”

He will be running in the race for a third time having finished second in 2014 and fifth a year later.

Pride also has progressive stayer Tamarack nominated after his seventh in the Lord Mayor’s Cup won by Grey Lion.

First-up the gelding caused an upset when he won over 1500m at the Hawkesbury Cup meeting.

The Craig and Shaun Phelan-trained gelding travelled to Victoria late last year for a four-start campaign which yielded victory in the Pakenham Cup and third placings at Kyneton and Moonee Valley.