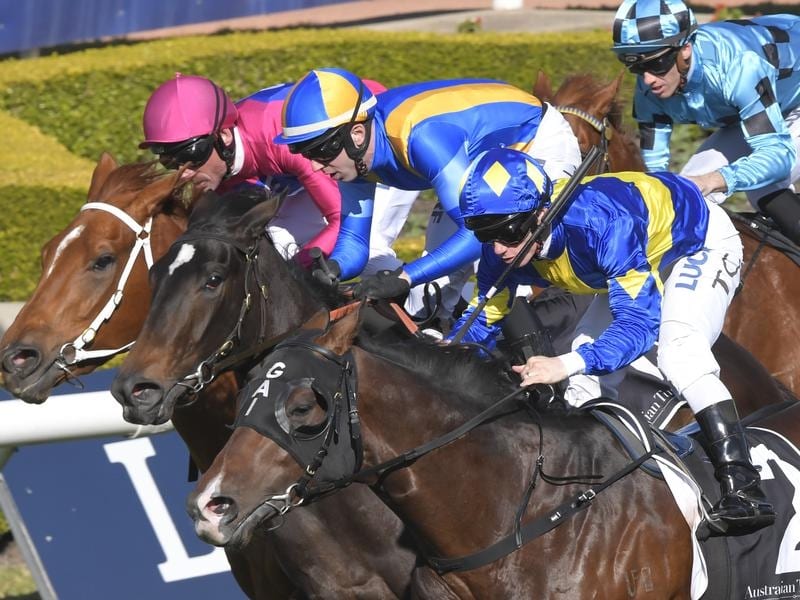 Dawn Passage (right) can emerge as a leading Golden Rose contender when he races at Rosehill.

Rated among the best of Bott and Gai Waterhouse’s team of three-year-olds, Dawn Passage takes on seven rivals in the Group Two Run To The Rose (1200m) on Saturday.

The colt is one of five high-profile horses engaged in a race that has emerged as the best guide to the $1 million Golden Rose, a Group One contest to be run over 1400m at Rosehill on September 21 .

Among them will be Exceedance, the Hawkes Racing-trained colt who shot to Golden Rose favouritism after an impressive first-up win.

Exceedance sprinted away with the San Domenico Stakes, a race that was on Dawn Passage’s early spring radar before a change of plans.

“We opted to bypass a couple of races we had him pencilled in for like the Up And Coming (Stakes) and San Domenico just in favour of keeping him on the fresh side,” Bott said.

“We wanted to go into the race with fresh legs and still have a horse to go through to the Golden Rose and potentially after that race as well.

“Obviously he’s got to take that next step up to that class but he’s hardly put a foot wrong to date.”

His most recent win came at Listed level when he resumed in the Rosebud over 1100m at Rosehill, beating the fillies Let It Pour and Lucicello.

Bott said there was nothing between Dawn Passage and stablemate Just Thinkin’ when they worked together at Randwick on Tuesday with the latter also in peak condition for Rosehill.

Just Thinkin’ will take on Group One Champagne Stakes winner Castelvecchio in the Dulcify Stakes as he tries to confirm a possible Victoria Derby campaign.

He is a three-quarter brother to Thinkin’ Big, a Group One placegetter and a two-time Group Three winner for the stable last season.

Thinkin’ Big ran his last race for Tulloch Lodge when down the course as favourite in the 2018 Victoria Derby and is now in Hong Kong.

“I know Just Thinkin’ is only coming through a maiden class win but I think there is a lot more from him to offer on Saturday,” Bott said.

“He is going up in trip which is ideal for him. We certainly haven’t seen the best from him yet by any means.”