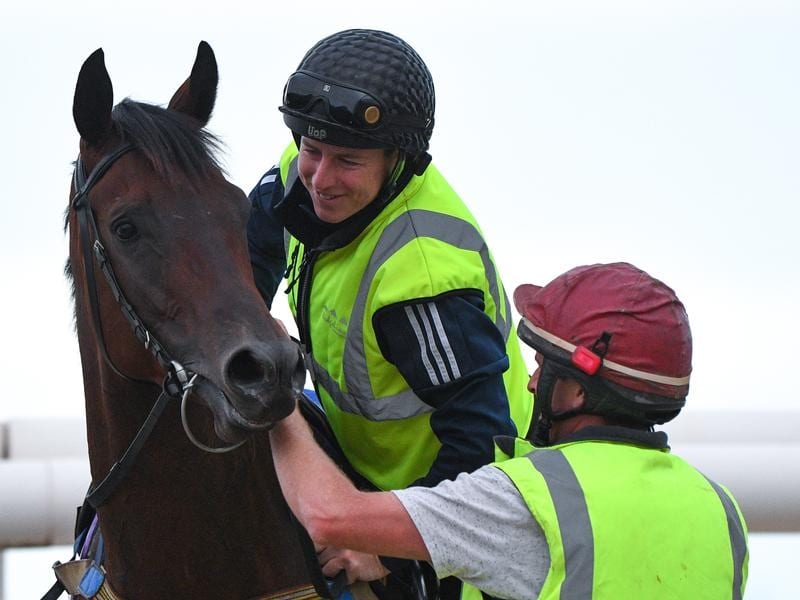 Damian Lane’s gallop on Catalyst at Mornington was the second time he had partnered him in work.

Damian Lane has given star New Zealand three-year-old Catalyst his seal of approval ahead of the Australian Guineas at Flemington.

Lane rode Catalyst in his final gallop at Mornington on Wednesday. It was the second time he had partnered the gelding in work and Saturday’s Group One over 1600m will be his first ride under race conditions.

Lane was suspended when James McDonald rode Catalyst into second place behind Alligator Blood in the CS Hayes Stakes (1400m) at Flemington on February 15.

After Wednesday’s work, Lane, who had galloped the gelding before the CS Hayes, said the gelding seemed to have improved since his Australian debut.

“He got a little bit keen early now that he knows where he’s going but he settled good through the middle stages and finished it off well,” Lane said.

“It’s going to be a cracking edition of the race. The 1600 metres is going to suit as will having that run under the belt.”

Lane’s report was music to the ears of Catalyst’s trainer Clayton Chipperfield, who has also noted improvement in the gelding since the CS Hayes placing.

“To get him back on today and compare the two gallops, it was much appreciated,” Chipperfield said.

“We knew we were going to need the run going into it (CS Hayes) and this is the one we wanted him peaking for.

“To be put in a dog fight like that and not lie down, he answered all our questions whether he would be competitive over here.”

Pre-travel from New Zealand, Chipperfield was concerned how Catalyst would cope with the heat.

A few weeks before leaving New Zealand, Melbourne was posting days between 35C and 40C.

“I was starting to stress a little bit,” Chipperfield said.

“I thought, ‘How’s he going to cop that?’ but the hottest day we’ve had is 30 degrees with a bit of breeze.

“It didn’t feel that hot and he’s handled it well.”

Chipperfield is looking forward to the return bout with Alligator Blood following their first meeting.

“He is a warrior that horse and one we have to try and beat but this time we match it at level weights and meet him at the mile,” Chipperfield said.

“I think the advantage is in our hands this time.”