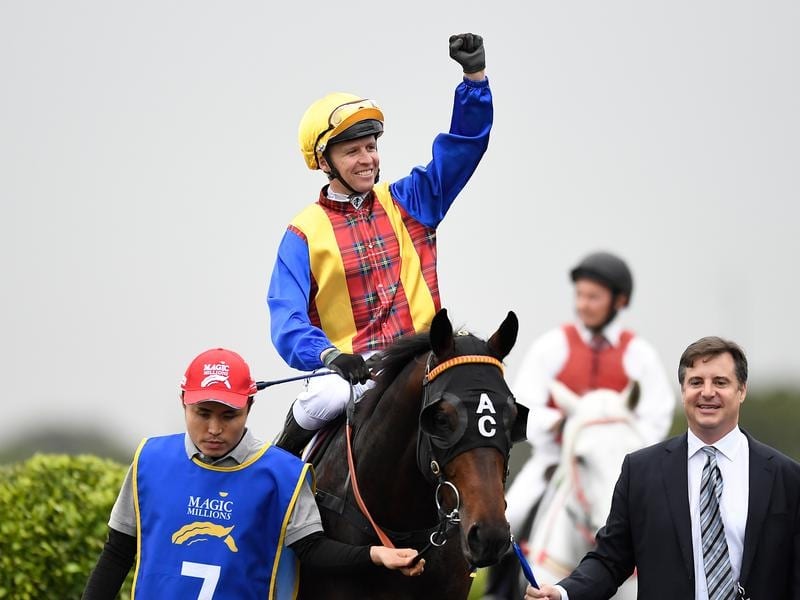 Prince Fawaz will be trying to change trainer Anthony Cummings’s luck in the Doncaster Mile.

The Doncaster Mile has not been the kindest race to Anthony Cummings but the trainer is hoping Prince Fawaz can rectify that at Randwick.

Cummings is yet to win the 1600-metre race famed as one of the most prestigious on the calendar, although he has twice come within a half-neck of victory.

Casino Prince was held up for a run and just missed when second to Triple Honour in 2008 and two years later Road To Rock was beaten a half-neck by another Chris Waller-trained horse, Rangirangdoo.

To compound the pain, Damien Oliver subsequently weighed in overweight on Road To Rock.

“If you want to look at the unlucky reel for Doncasters, Casino Prince turns up there and Road To Rock,” Cummings said.

“He ran second to Rangirangdoo and Ollie came back and he rode him a kilo heavy.”

Cummings figures he is due a change of fortune and believes Prince Fawaz is his best chance yet to deliver it.

Three-year-olds have a wonderful record in the Doncaster having won eight of the past 20 renewals, Brutal last year the most recent.

Cummings is mindful of the statistics but he also strongly believes Saturday’s $1.5 million feature is simply the best fit for his horse.

A Group One-winning two-year-old, Prince Fawaz struggled to recapture form in a brief spring campaign but after an improved performance in the Randwick Guineas (1600m) two starts ago, he was back to his best with a narrow second to Castelvecchio in the Rosehill Guineas (2000m).

“I just thought it was the right race for him, it made sense in terms of what we’ve seen from him and where I think his capability lays,” Cummings said.

“If the rain does turn up, having had that run at 2000, it will hold him in very good stead.

“The thing is he’s got such a good attitude and he’s kind to himself. He can do that work (early) then just switch off.”

Stable apprentice Jean Van Overmeire has landed the Doncaster mount on Prince Fawaz and Cummings views it as a great opportunity for the talented young jockey.

Van Overmeire, who is chasing his maiden Group One success, has ridden the colt in the Hobartville and is his regular work partner.

“He rides him trackwork and knows the horse,” Cummings said.

“He’s got the makings of a very good rider so it looks to me like a nice step for him up to this grade.”

In an open race, fellow three-year-old Brandenburg was a $6.50 favourite on Thursday, ahead of Kiwi mare Melody Belle at $7.50 with Prince Fawaz at $15.