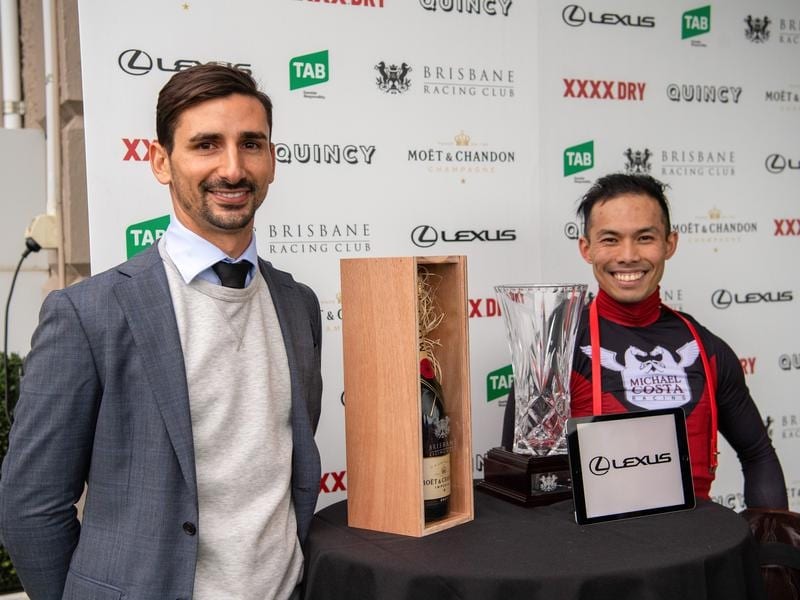 Gold Coast trainer Michael Costa’s loyalty to jockey Allan Chau paid off when they combined for their first Group wins at Eagle Farm.

After years riding around the NSW northern rivers Chau decided to switch to the Gold Coast this season where he does much of the riding for Costa.

Costa said he had never considered getting a high-profile jockey even after Supergiant had run second at his previous start in the Doomben Guineas.

“Allan does a lot of the hard work and he deserves his chance. It is his first Group winner and mine too so it is all the sweeter,” Costa said.

The winter plans for Supergiant had been the Queensland Derby but when that race was scrapped, Costa made a change.

“Now he can go to the Rough Habit Plate in a fortnight. He will be even better for the effort today,” Costa said.

“He is a horse which seems to get fit with racing and that was only his fifth run.”

“Chris Waller’s Queensland manager recommended Phil so I owe him a favour,” Costa.

He said he knew he had a good horse when Supergiant beat top galloper The Candy Man in an exhibition gallop.

Chau said he believed Supergiant would go on to be a top-class horse.

“He is so tough and showed it again today when challenged,” Chau said.

Trainer Chris Anderson was disappointed but not deflated by Ballistic Boy’s second.

“The finish was touch and go. Onwards we go and there is always next week,” he said.

Kinane passed a vet’s inspection after a float incident on the way to the track.

He was forced to make a long run after going back from his outside barrier.