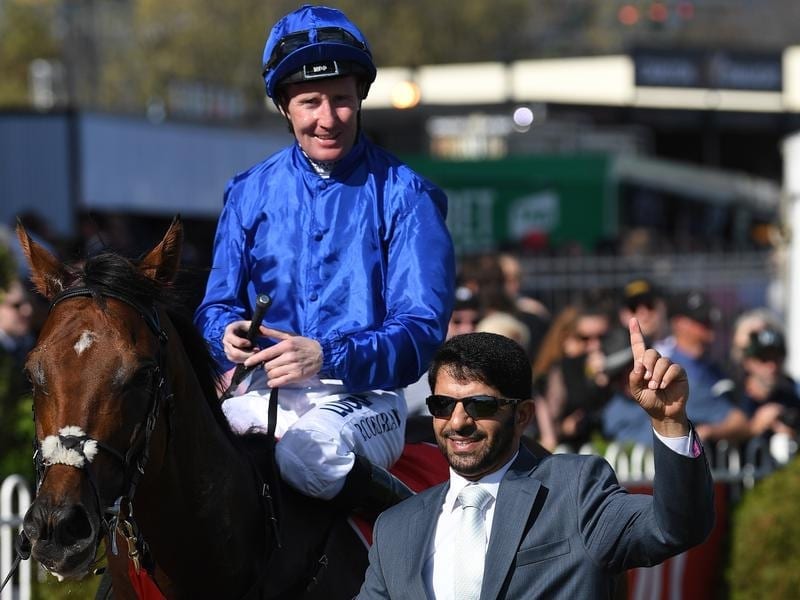 Caulfield Stakes-winning jockey Pat Cosgrave is looking for a 2nd Aust G1 in the Caulfield Cup.

Irish jockey Pat Cosgrave is on a mission for Godolphin and trainer Saeed bin Suroor.

Part one was completed on Saturday when he guided Benbatl to victory in the Group One Caulfield Stakes.

His next target is Saturday’s Caulfield Cup in which he rides Best Solution, a $17 chance in latest markets which are headed by Youngstar at $5 ahead of Kings Will Dream ($6) and Yucatan ($7).

It is 10 years since All The Good gave Godolphin and bin Suroor victory in the Caulfield Cup.

Cosgrave is looking forward to the challenge aboard Best Solution, knowing it’s also a warm-up race for the Melbourne Cup.

“I feel he’s improved in the last six months or so, I don’t know why,” Cosgrave said.

“He won a Group Two and toughed it out pretty well at Newmarket and went to Germany and won both times there as well.

“I think the track will suit him. He’s pretty straightforward and likes a little bit of cover.

“Obviously I haven’t seen the final field yet but he’s got a live chance.”

Cosgrave had his first look at Caulfield on Saturday but is no stranger to racing in Australia having ridden in Sydney around 15 years ago as a 20-year-old.

During that stint he rode on the provincial and country circuits, stating he rode at a venue that didn’t have a grandstand.

Now he’s a Group One-winning rider with three top-level victories to his name in England, two in Germany and Saturday’s on Benbatl.

He won’t get the opportunity to partner Cox Plate-invitee Benbatl against Winx with his regular rider Oisin Murphy booked.

Cosgrave said it would be a fascinating race.

“I probably don’t want to ride him as if he did happen to beat her I’d probably get escorted out of the country fairly quick,” he said.