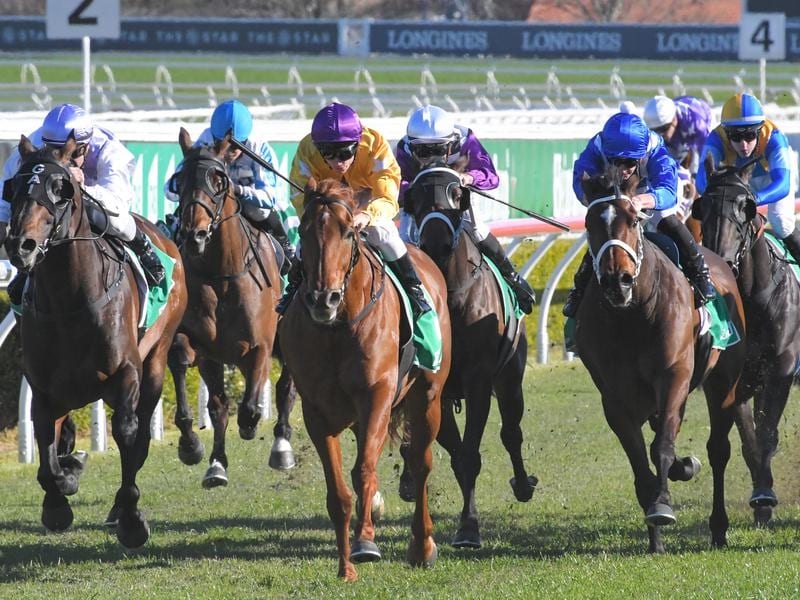 Wolfe (yellow) is one of two horses trying to earn a place in the Caulfield Cup via the Coongy Cup.

Former South African galloper Yulong Prince and Japanese-bred Wolfe are making a last-ditch effort to force their way into the Caulfield Cup.

Of the 13 runners accepted for Wednesday’s race, Yulong Prince, to be ridden by Mark Zahra, and Wolfe, with Linda Meech aboard, are the only two aiming at a Caulfield Cup start.

Both need to win to get into the final field of 18 plus four emergencies with Yulong Prince yet to pass the first ballot clause while Wolfe is No. 41 in the entry order.

Final acceptances for the Caulfield Cup are taken on Wednesday afternoon with the barrier draw to take place that evening.

Yulong Prince has had three starts since joining Chris Waller and was a last-start eighth behind Black Heart Bart in the Underwood Stakes at Caulfield on September 29.

Wolfe is a five-time winner from nine starts for Gai Waterhouse and Adrian Bott and was last successful on the inner-track over 1800m at Randwick in August.

The stayer attempted to earn a Melbourne Cup berth at his most recent outing when third behind Surprise Baby in The Bart Cummings at Flemington on October 5.