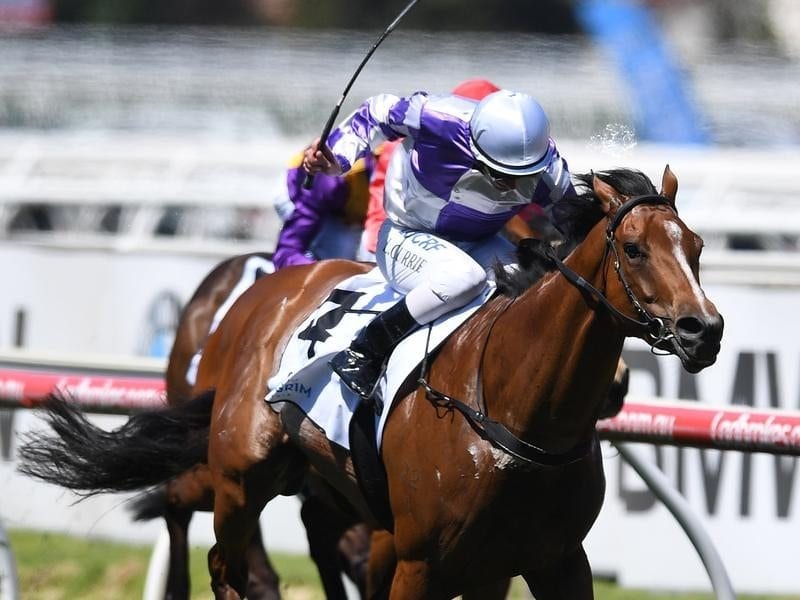 The Tony McEvoy-trained Cool Passion steps up in grade and distance in the Myer Classic.

Disappointed trainer Tony McEvoy has been forced to keep former leading Victoria Derby contender Royal Symphony at home but still hopes to be a Group One player on the first day of the Flemington carnival.

Royal Symphony came out of the Cox Plate the worse for wear after a torrid run on Saturday and Cool Passion could be the stable’s main hope for a Group One win on Saturday.

McEvoy admits he is sending the former West Australian mare into uncharted territory in the Myer Classic (1600m), a weight-for-age race for fillies and mares.

The trainer then stretched the mare out to 1400m in the Group Two Tristarc Stakes at Caulfield last Saturday week when the six-year-old was narrowly beaten in a photo finish by dual Group One winner Global Glamour.

That performance was enough for McEvoy to press ahead with plans to step her up in distance and grade.

“She is going to new territory but she deserves her chance,” McEvoy said.

“She has come through her last run tremendously well.”

Cool Passion has won nine of her 19 starts.

Luke Currie has ridden Cool Passion in her two Melbourne starts this spring but was suspended for careless riding on her Manikato Stakes winning-stablemate Hey Doc last Friday night.

Hong Kong-based Tommy Berry has picked up the ride.

Six individual Group One winners feature among the 30 nominations.

Chris Waller has Foxplay and Egg Tart among his five entries while the other Group One winners entered are Silent Sedition, Global Glamour, Heavens Above, and last year’s winner I Am A Star.

Egg Tart and Foxplay have been installed equal favourites at $6.50 ahead of Dixie Blossoms and Global Glamour at $7.50 with Cool Passion at $17.