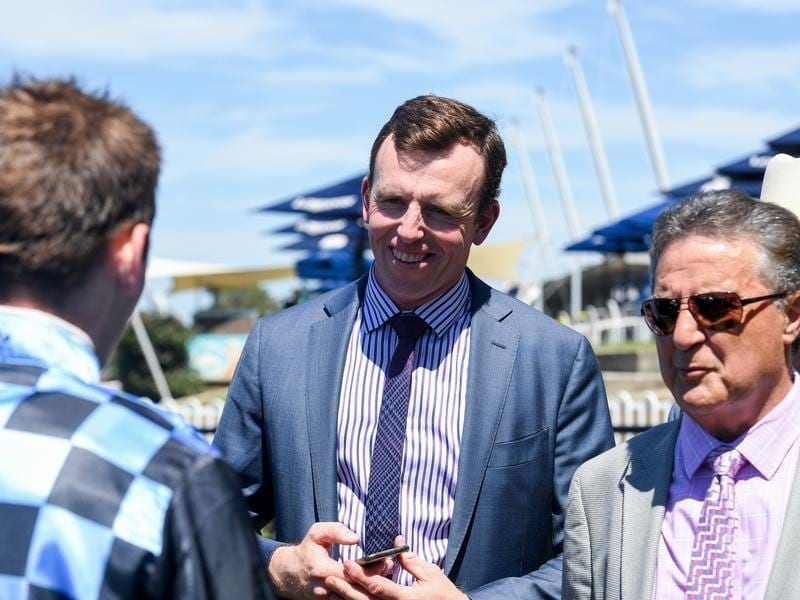 Trainer Edward O’Rourke (centre) is hoping Churning can show her talent in her Canterbury debut.

Edward O’Rourke is upbeat about Churning’s ability to handle race day pressure for the first time as the trainer primes his first juvenile by Lonhro for her debut at Canterbury.

The filly is the 11th two-year-old the Randwick trainer has sent out this season and Churning will attempt to emulate Ringerdingding’s winning debut at Rosehill in February when she lines up in Wednesday’s TAB.com.au Plate (1100m).

While the Lonhro connection is welcome, O’Rourke is not expecting instantaneous success for Churning, an example of the long-standing support from Bluesky Bloodstock’s Mark Sowerby.

“Lonhros tend to be more three-year-olds, but there’s always an exception to the rule,” O’Rourke said.

“She’s shaping up nicely. She’s shown us plenty all the way along but she’s a Lonhro so she’s obviously taken a bit of time and she’s still a bit immature.”

O’Rourke said Churning’s dam Emmalene added an element of intrigue as the newcomer is her first foal to race.

“She was a mare with a lot of talent. She was very quick and went up to 1400 (metres) so hopefully Churning can follow in her mother’s footsteps,” he said.

Bluesky Bloodstock paid $280,000 for the filly at last year’s Magic Millions sale and she is among a group of horses entrusted to O’Rourke by Sowerby since the expat Irishman gained his training licence in April last year.

“He’s wanted to help me out the whole way,” O’Rourke said.

Churning, the $5 second elect with the TAB on Tuesday, has had two barrier trials with race jockey Blake Shinn aboard to prepare for her first start on heavy ground.

O’Rourke was particularly encouraged by Churning’s last trial on a soft track at Rosehill where she won over 900m on June 8.

“Blake asked her to quicken up and she quickened up very nicely. She’ll improve off that last trial and it’s not the end of the world if she gets beaten. It’s just a stepping stone,” he said.

The Peter and Paul Snowden-trained Jen Rules led the market at $3.20 on race eve..