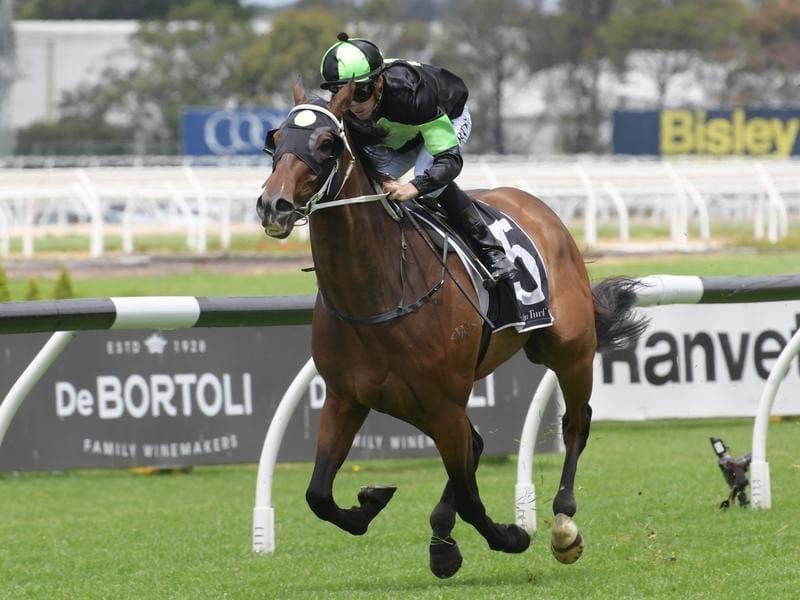 Tamarack is chasing back-to-back wins at Rosehill before stepping up to black-type racing.

Barn mates Destiny’s Kiss and Tamarack will line up in separate races at Rosehill on Saturday but the pair share a common summer carnival goal.

Trainer Joe Pride is aiming both horses at next month’s Christmas Cup and while veteran Destiny’s Kiss is a near-mainstay in Sydney’s summer staying races, Tamarack will have to earn his way there.

Destiny’s Kiss will line up in Saturday’s ATC Cup at Rosehill, having enjoyed a brief freshen-up in the paddock since his placing in last month’s City Tattersall’s Cup at Randwick.

With 59kg and the prospect of a rain-affected track, Pride expects him to produce his usual honest performance despite 2000 metres being short of his best distance.

“Once he’s in below 60 (kilos) with a soft track he’s always competitive,” Pride said.

Tamarack will race 40 minutes later in the ATC Tipping Competition Handicap (2400m) in search of successive wins over the Rosehill course and distance.

Pride would prefer a firm surface for the five-year-old who he says must all but win to progress to stakes company.

“If he wins he’ll go to the Christmas Cup,” Pride said.

The trainer will also start Pecans, New Tipperary and My Favourite in stakes races on Saturday while Easy Eddie will attract extra attention from Pride when he resumes over 1100 metres.

Pride is a part owner of Easy Eddie who fits a particular criteria.

“I’m a bit tight, I’ve only got shares in the cheap ones,” Pride said.

Easy Eddie wound up his most recent campaign with a third to Tactical Advantage in the July Sprint at Randwick and will be given the chance to continue his progression through the grades.

While Pride notes the horse historically takes a run or two to hit form, he has been rapt with Easy Eddie’s two recent trials.

“He’s a horse who has been beaten in his three first-up runs so as well as he’s trialled, I’m going into it a little bit guarded,” Pride said.

“But I don’t know that he’s ever trialled as well as what he has this time around.”