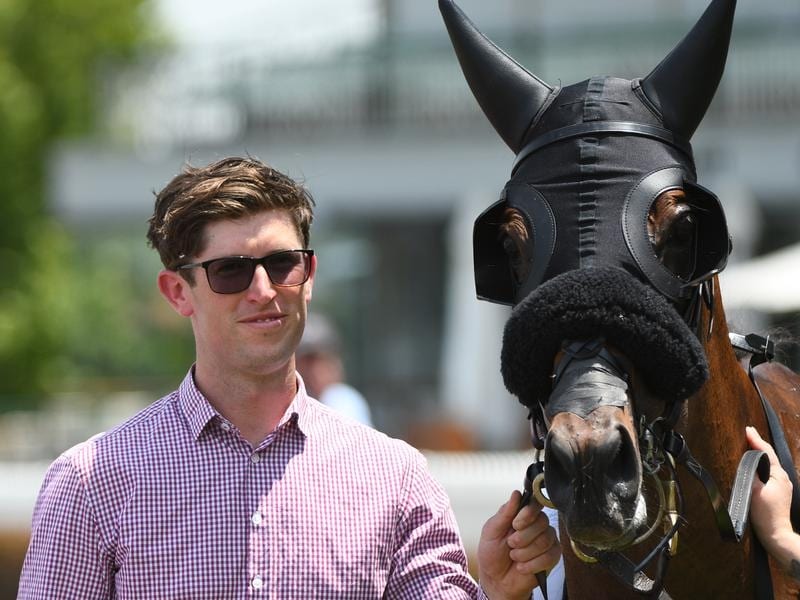 Joseph Waldron is making inroads into the Australia racing scene since coming from New Zealand.

Hard work is paying off for trainer Joseph Waldron who landed his first City winner at Caulfield since moving from New Zealand.

The one-time travelling foreman for leading trainers Murray Baker and Andrew Forsman, Waldron set-up a training base at Mornington in November 2018.

Victory by outsider Break My Stride in the Ladbrokes Cash Out Handicap (1600m) on Wednesday was Waldron’s fourth winner since making the move and his first in town.

The victory of Hinchin Power at Ballarat in October was classified as a metropolitan victory, but Waldron was delighted to get Wednesday’s win on the board.

“This is a huge thrill,” Waldron said.

Waldron, 28, brought 2015 Caulfield Cup winner Mongolian Khan to Melbourne and also travelled with Turn Me Loose on his forays to Australia for Baker and Forsman.

“I did a couple of years as travelling foreman for Murray and Andrew which was a great grounding and which has ultimately led to this,” Waldron said.

“I was lucky enough to look after some very good horses and being hands on with them you learn a lot, the type of work they need, the feeding, it was a great apprenticeship.”

Waldron said his slow start can be attributed to bringing horses from New Zealand that were harshly treated in the ratings, but is now building a nice team of younger horses.

With 15 horses in work, he would like to expand that to 25 or 30, which he said was dependant on having capable staff.

“Getting the right staff is important so that all the horses can get the right amount of attention, especially a horse like this (Break My Stride) who can be a bit of a handful,” Waldron said.

Riding honours on Wednesday went to apprentice Liam Riordan who won the final two races on Donndubhan in the Ladbrokes Info Hub Handicap and Parlay Princess in the Ladbrokes Protest Payout Handicap.

John Sadler, the trainer of Parlay Princess, said Riordan was rewarded for his work ethic.

“He’s apprenticed to the Gelagotis stable but Liam does a lot of work for us and that hard work is starting to pay off,” Sadler said.

Ethan Brown and apprentice Teo Nugent were each suspended for eight meetings on careless riding charges by Racing Victoria stewards.