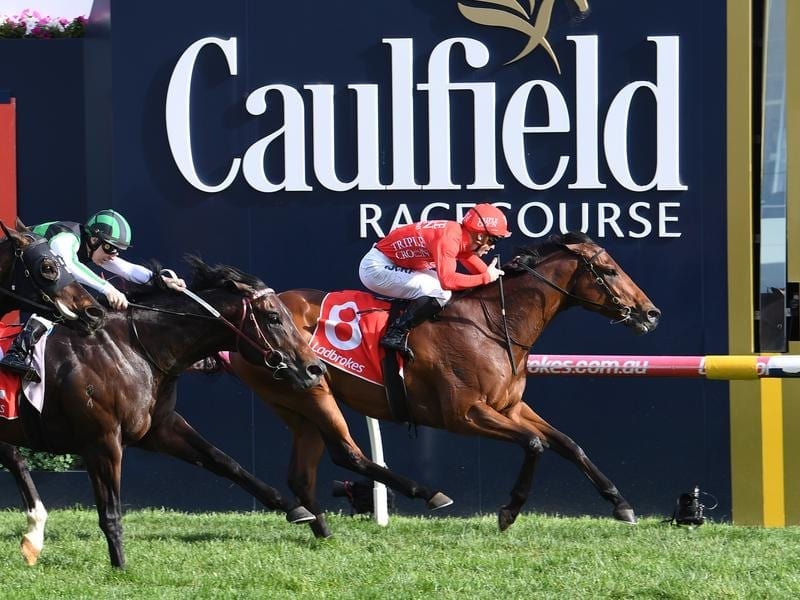 Caulfield plays host to nine races on Saturday, headlined by the Sir John Monash Stakes. The track is rated a Soft 6, with the rail in the true position for the entire circumference of the course. Race 1 is set to jump at 11:50am AEST, with the feature running at 3:35pm.

Lindsay Smith and Michael Rodd combine in the fifth race on the program with unbeaten gelding Mystery Shot. The Shooting To Win three-year-old took country form to town last start with a great win at this course. On debut, the gelding won by three lengths over the 1400m at Warrnambool in a race that has thrown six subsequent winners. First up this prep, he bolted in at Ballarat under Melbourne Cup winning hoop Michael Rodd, who has retained the ride. If he can find the plastic from barrier 10, he should lead them a merry dance and take some running down. He does rise in weight significantly from his last start, which is a slight concern, but we think he can still be too classy.

Last year’s Victoria Derby favourite, Thought Of That, finds himself in a very suitable race now that the original top elect, Right You Are, has been scratched. The So You Think gelding had been out of form since his 10th placing in the spring classic behind Warning, running seventh and eighth at his two runs earlier in the year. He was given three months off the scene and returned with a very encouraging second behind Heavenly Emperor two weeks ago over 1600m. The step up to 2000m is sure to suit, with his only start at the distance being at this track, resulting in a 3.75-length romping over the eventual Derby winner. He didn’t get it all his own way last time out and battled on very gamely, carrying the same weight as he will tomorrow. Michael Poy from barrier 10 will use the gelding’s early speed to find the front and he should be too good for them in the latter stages.

A definite roughie that could send punters home happy is the Team Hawkes import Poetic Dream. He has had 12 runs in Australia and never run a place, which is obviously concerning, but his last-start fourth behind Morrisy over 1440m caught our attention. The stable is flying and certainly knows how to train an import, and we just think this gelding can run a race at odds. Up to 1700m has to suit considering he was a two-time winner over the mile in France. James Winks retains the ride and should land in a forward spot from barrier 11. We will definitely be betting more the place on the six-year-old, but we think he is ready to fire a shot.