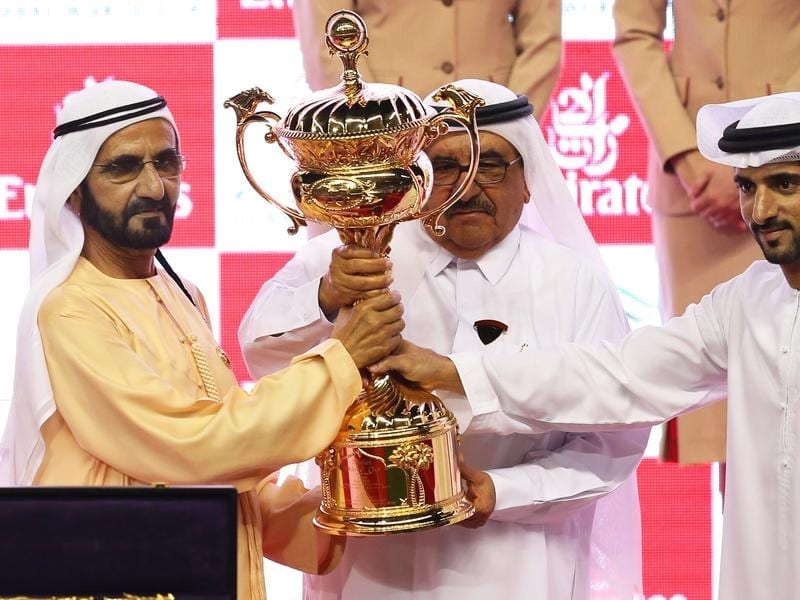 Dubai ruler Sheikh Mohammed (l) has celebrated the 300th Group One win for his Godolphin operation.

The famous royal blue silks of Godolphin have been carried to victory for the 300th time at Group One level with the win of Castle Lady in France.

Castle Lady won the Poule d’Essai des Pouliches, the French 1000 Guineas, at Longchamp on Sunday, just under 25 years after Balanchine won the English Oaks in 1994 to give Godolphin its first win at the highest level.

Godolphin was the brainchild of Dubai ruler Sheikh Mohammed bin Rasheed al Maktoum and the organisation has won Group One races in 12 countries for 20 different trainers and 59 jockeys.

Notable winners during the 25 years include Lammtara in the 1995 English Derby along with Street Cry, Dubai Millennium and this year’s winner Thunder Snow, in the Dubai World Cup.

Australia played an important part in Godolphin’s most successful year, 2018, when it claimed 30 Group One races in eight different countries starting with Hartnell in the C F Orr Stakes and including a first Melbourne Cup with Cross Counter.

This year has also started well with Godolphin represented by the first three home in the world’s richest two-year-old race, the Golden Slipper, won by Kiamichi.

Castle Lady meanwhile, has firmed to 9-2 for the French Oaks (Prix de Diane).