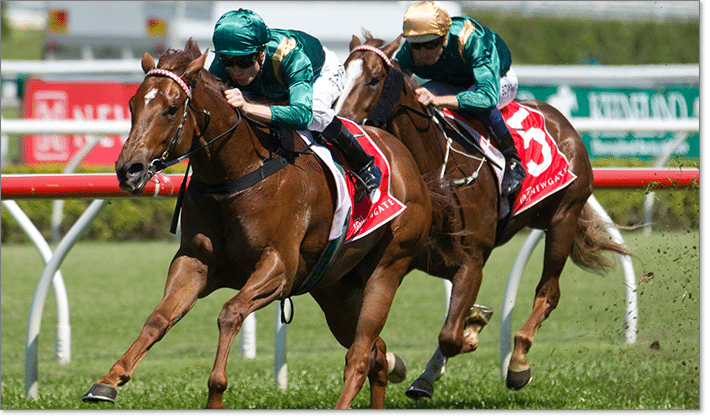 The Peter and Paul Snowden-trained colt started the $1.28 favourite for the 1200-metre race on Thursday, but some lucky punters were able to grab $1.45 in the early betting. Those punters enjoyed an effortless win from the two-year-old, which will now head to Gold Coast as the horse to beat at the Magic Millions.

Jockey Blake Shinn didn’t move a muscle on Capitalist as it cruised to a 2.75-length victory over Niccolance and the Gabrielle Englebrecht-trained Ahgna, which was having its first career start.

Co-trainer Peter Snowden was never worried in the run, but he knew just because the bookmakers thought it was a moral, it doesn’t mean the race was wrapped up.

“He had a perfect run and Blake [Shinn] did the right thing coming around the other horse’s heels and let him balance up,” Snowden said.

“It’s easy to look at the tote board and say this will be a cake walk, but it’s not a cake walk, all races are hard to win but he showed what sort of talent he has.

“He does everything right.”

Shinn believes Capitalist could take out the Magic Millions on January 9 at the Gold Coast.

“When you’re on a horse of this calibre, especially on a track like this, he could have been a victim of just being a little bit complacent and maybe spotting the leaders too far, but we drew a gate and I was mindful of using it and putting him right in the fray,” Shinn said.

“He just oozes class he was always in control and won with a fair bit of hand. It’s very exciting going to the Gold Coast.”

Punters are also excited about its chances, betting the colt into $1.80 for the main event next month.

Capitalist is dominating the market and it’s no surprise. The classy colt has done everything right in two runs to date and there will be plenty of futures and multi-bets running through it.

Wyong placegetters Niccolance ($11) and Aghna ($26) are solid chances in the market, which will change after Saturday’s races at Rosehill with the likes of Faraway Town ($17) and Greyt Start ($21) both in action.

For a complete market, head to Sportsbet.com.au*

Flippant returns with 3YO Guineas victory

The other major race on Thursday’s Wyong Magic Millions card was the 3YO Guineas, which saw the return of Flippant.

Another Peter and Paul Snowden-trained runner, Flippant returned to the winners enclosure with a 1.25-length victory over the previously undefeated Egyptian Symbol which lost no admirers, and Murt The Flirt which ran three wide but still battled on well.

Flippant closed as the $3.60 favourite at CrownBet.com.au and has subsequently firmed into $6 for the 3YO Magic Millions at Gold Coast in January.

“That was totally out of character for her,” Peter Snowden said.

“She’s been super honest at every start she had and was just too bad to be true and we found that problem with her straight afterwards.

“To the stewards credit they make these horses trial to make sure they are right again for the public to have confidence in them.

“At her second trial we gave her a good click-up and the real Flippant was in that trial and she brought that form here today [Thursday].”

Flippant will now forge onto the $2 million Magic Millions 3YO Guineas on January 9.

“The Magic Millions has got to be seriously thought about now,” Snowden said. “The Guineas race, I think it’s perfect for her.

“Seven furlongs [1400 metres], she relaxes really well, showed a great turn of foot there and was strong at the end.”

Flippant is now into $6 for the Magic Millions 3YO, behind only the super talented Mahuta at $4.

The Bjorn Baker-trained Egyptian Symbol has also been well backed into $8 after a strong run for second and the disappointing Gai Waterhouse-trained Flamboyant Lass has drifted to $13 after dropping out throughout the run.

Very Choosy is currently $13 in the market and will run at Moonee Valley this Friday night.