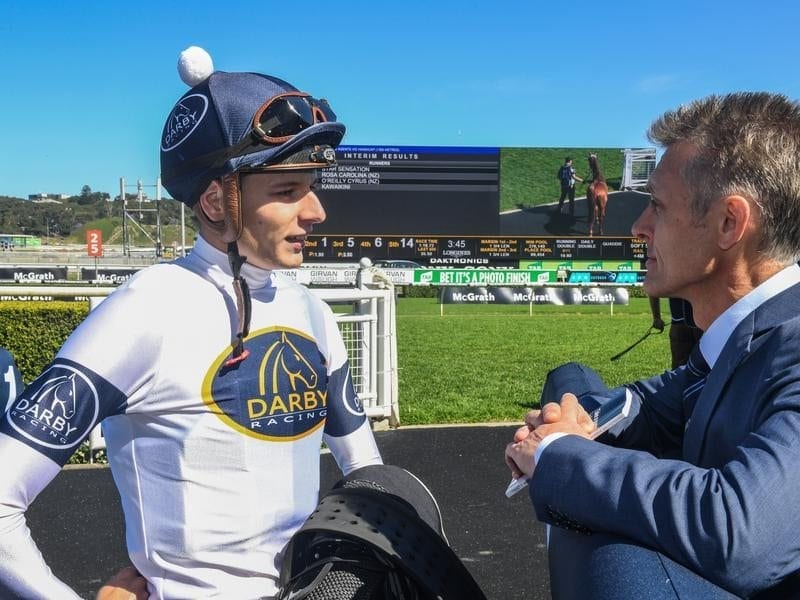 Trainer Mark Newnham (right) will have three runners in the $500,000 Inglis Nursery at Randwick.

Mark Newnham’s association with multiple Group One winner Pierro takes on a new dimension when he sends Canyonero to the races for the first time.

Newnham rode the 2012 Golden Slipper winner during trackwork when he was on Gai Waterhouse’s staff at Tulloch Lodge and he has five horses out of Pierro in his Randwick stable.

Canyonero is the only colt in that bunch ready to race, with Newnham picking out Saturday’s $500,000 Inglis Nursery (1000m) at Randwick to get him underway.

Although his background with Pierro, who won 11 of his 14 starts and amassed $4.5 million in prize money, steered Newnham towards the stallion’s progeny it was not the only reason he spent $130,000 at the Inglis Easter sale.

“A lot of the Pierros look like they need a little bit more time, he looked like a two-year-old type so it wasn’t just because of his dad,” Newnham said.

Newnham also rides Canyonero in his exercise and noticed similarities to Pierro, who won the Group 1 Golden Slipper, Sires’ Produce Stakes and Champagne Stakes as a two-year-old.

“He’s got the same relaxed nature, generally most of them do. Physically he’s nothing like dad, mentally he’s got most of his traits,” he said.

Newnham, who has also accepted with Pleated Miss and The Enzo for the Inglis Nursery, was encouraged by Canyonero’s only barrier trial at Randwick last month.

“I’d have preferred to trial him twice but he’s shown good ability so we might as well take a chance on a half-million dollar race,” he said.

Choisir filly Pleated Miss also races for the first time on the back of one barrier trial where she missed the start.

A $70,000 purchase at the Melbourne Inglis sale, Pleated Miss has been given barrier practice sessions to mend her ways.

Newnham has also brought The Enzo back from a let-up after the colt’s sixth on debut in mid-October at Randwick.

“We’ve brought him back with this race in mind, he trialled well last week and has blinkers on for the first time.”