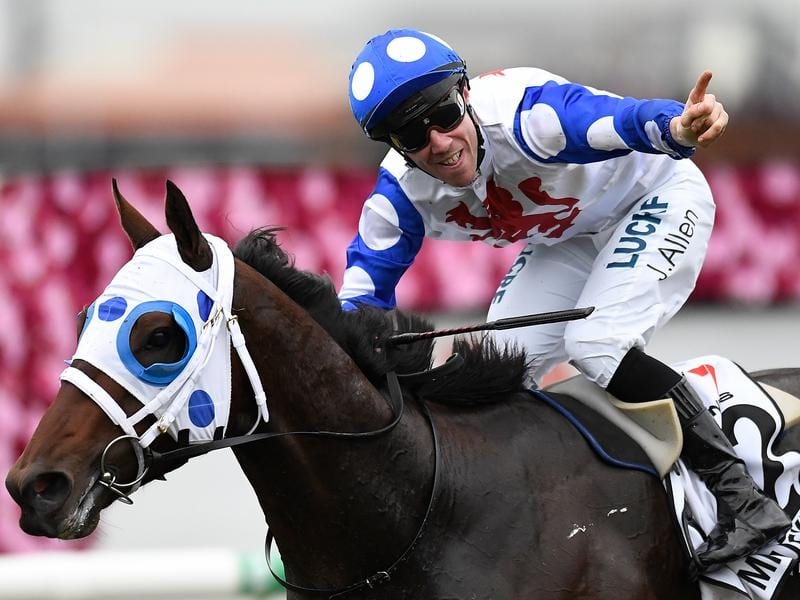 The fourth and final Group 1 on Derby Day is the $1.5 million Kennedy Cantala Stakes. A full field of 16 has been assembled, with a further four emergencies on standby. Mr Quickie and Buffalo River, who combined for the quinella in the Toorak Handicap a fortnight ago, are the only two runners in single figures. It’ll be a solidly run mile, with Buffalo River the leader ahead of Streets Of Avalon, The Velvet King, Age Of Chivalry and Olmedo from the deep.

Fifty Stars did the Blamey/Australian Cup double in the autumn and looks to have come back in good order with an eye-catching third in the Moonga Stakes last time out. He drops 2kg from that run and rises to a mile, which will help. The big query is where he gets to in the run from barrier 15 and how much of a start he spots them. Don’t leave him out of your quaddie.

He was simply dominant in the Toorak and is looking to do the double here as Fierce Impact did last year. Phillip Stokes looks to have worked out the Queensland Derby winner now by keeping him fresh in 1600m handicap races, as opposed to setting him on a cups campaign. Jamie Kah is airborne and should find cover in the three-wide line from the unappealing gate. If he replicates his Toorak run, he wins this.

Chris Waller and James McDonald combine with French import Olmedo. The six-year-old entire has only had the one Australian start back in March when beaten a fair way, but he has since come back in fair order after four nice trials. He has strong form around Circus Maximus and last August defeated Mountain Angel, who this year beat Sir Dragonet by 2.5L at Royal Ascot. The outside alley makes it hard, so we just want to see him first up, but the form is certainly there.

William Pike and Team Hawkes have built a formidable partnership this spring and are striking at 29% together, which is huge at this time of year. Wild Planet wasn’t beaten all that far in the Epsom before returning to Melbourne, where he did enough to win the Moonga Stakes over 1400m. Barrier eight will see Pike land in the first half and travel sweetly into the straight. The horse is flying at the moment and must be included. Can he see out a strong 1600m?

Yulong Prince was a winner at Flemington on Melbourne Cup Day last year and has been racing well since, culminating in a fourth in the Epsom. He runs well off a freshen up and should be suited by the Flemington mile. World-class hoop Damien Lane will have to work early from barrier 14, which is a concern, and the horse might be looking for 2000m now.

James Cummings’ seven-year-old gelding won this race two years ago but hasn’t replicated that form since. His first-up run was huge, coming from near last to run third, but he was lacklustre in the Moonga Stakes last start when only managing to beat one home. He drops in weight but hasn’t won in two years, so it seems hard to bounce back in this.

The flashy chestnut gets to Flemington for the first time this campaign and should thrive at HQ. This horse is the ultimate tease, however, coming from near last in each of his runs with a flashing light. He was excellent in the P.B. Lawrence and the Memsie Stakes, finishing fourth on both of those occasions, before putting in sub-par runs in his last two. The 1600m at Flemington will suit, but his racing pattern makes it hard to back him.

I Am Superman settled much further back than we anticipated in the Toorak last time out, but he did work home evenly. Barrier one should allow Jye McNeil to rail up and be right thereabouts in a race that doesn’t necessarily reek of speed. He gets to Flemington for the first time here, and we don’t think that will suit.

The very consistent Rock heads to Melbourne for only the second time, once again to contest the Cantala Stakes. His win in the Cameron Handicap was super, but he was well below market expectations when seventh in the Epsom. While he will be suited by the big track, he rises 1.5kg, maps awkwardly and looks a touch outclassed.

This one beat Super Seth in the Futurity back in February but hasn’t won since. His runs this spring have been ordinary at best, and his top chance of another Group 1 looks to be at Caulfield over 1400m. His $101 quote is probably generous.

He should’ve won three races last campaign in Perth but walked away with none, although he was beaten by a mere 0.96L over the course of three runs. Two of those runner-up performances came at the hands of talented mare Perfect Jewel. That form has stood up over here, which is a plus, as is the rise to 1600m. From barrier four under Luke Nolen, he’ll box seat and be right in the finish. He certainly isn’t the worst $41 shot going around.

We’re happy to say this horse can’t win. While we don’t think he’ll be the last one home, we cannot see him turning the tables on the likes of Mr Quickie and Buffalo River, especially at a mile. Daniel Moor will push the gelding forward from the wide alley, but we expect him to do too much work and drop out. His run last Saturday was fair behind Homesman, but he had every chance and didn’t worry the winner at all. Hard pass.

Craig Williams sticks here, which is a big advantage for this gelding who came to Australia with big raps. He was great in the Toorak last start, just getting gunned down late by Mr Quickie. Barrier nine will see him lead, which has been a proven formula at this track and distance for him in the past. He stays at 53kg, which means he meets Mr Quickie 1kg worse off at the weights, so we see it hard for him to bounce back. He’ll be in it for a long way though.

After a sixth in the Toorak last start, Chief Ironside looks outclassed in this. He has had eight starts over a mile and only tasted victory the once, which is a big concern, and his form leading up to this has been plain. He can win without us.

The Coongy winner from two weeks ago elected to bypass the Caulfield Cup in preference for this, which seems an interesting tactic. It was a winning formula for Best Of Days two years ago, so it certainly isn’t the strangest training decisions we will see. He is unbeaten at a mile and should be suited by Flemington, which he sees for the first time. He’ll settle midfield and do his best work late.

Big Time Bossy hops on this three-year-old colt. King’s Legacy is a multiple Group 1 winner but hasn’t come back the best this spring, although he placed in the Golden Rose and ran midfield in the Caulfield Guineas. With just 51kg on his back, he’ll definitely see out the mile and will be strong late. It’s just a question of whether he is going well enough to win.

Lindsay Smith’s entire loves the Flemington mile and has been racing well this prep if you ignore his last run when wide throughout. If he gets a start, he won’t be the worst.

Was racing brilliantly but failed as favourite in the Toorak last start. He hasn’t won at Flemington in three starts but does eat up a mile. The 53kg will see him hold his own if he gets into the field.

Gets the blinkers for the first time and has been racing well around Arcadia Queen and Russian Camelot, which is great form. He’ll get a great run in the race from the draw. Each-way claims if he starts.

A dual acceptor who is guaranteed a start in the $7.5m Golden Eagle in Sydney. He won’t be starting in this.

In what is a ridiculously tough race, we are siding with the favourite after that brilliant win in the Toorak last start. There are plenty of chances, with the best at odds being Olmedo and The Velvet King. It’s not a race we are overly keen to play in, however.