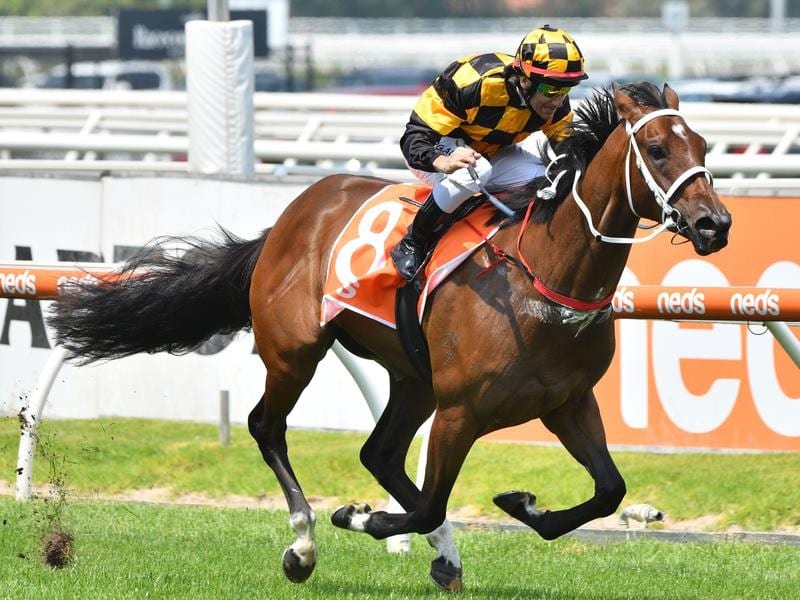 Letzbeglam will be one of two Blue Diamond Stakes runners for Trent Busuttin and Natalie Young.

After making the move from New Zealand to set up stables at Cranbourne, training and life partners Trent Busuttin and Natalie Young are transforming their business.

Before that shift to Victoria three years ago, Busuttin and Young concentrated on the New Zealand sales looking for stayers with the hope of winning a Derby, an Oaks or one of the big Cups.

Busuttin and Young have since altered their focus and while still searching for stayers in New Zealand, they are now buyers of yearlings at sales around Australia.

That shift has resulted in their first starters in Victoria’s premier two-year-old race, the Blue Diamond Stakes at Caulfield on Saturday where they saddle colt Tagaloa and filly Letzbeglam over 1200m.

“We were peg-holed as a staying type of trainers, which is fine with us as we enjoy training stayers,” Busuttin said.

“We’ve only been in Australia three years and it takes time to find them, get them and buy them and we certainly have gone out to buy two-year-old types in the last 12 months.

“This is a defining race on the calendar, especially for the colt, but I don’t care if either of them wins it.”

Betting on Saturday’s race has Letzbeglam the better fancied of the pair at $7.50 with Tagaloa a $16 chance.

The unbeaten Hanseatic, winner of the “boys” Blue Diamond Preview and Prelude, is an easing $2.60 favourite with the Peter and Paul Snowden-trained Rulership second fancy at $7.50.

Busuttin rates Hanseatic a deserved favourite but said Tagaloa was fitter and sharper and can finish closer on Saturday.

Tagaloa went 10 weeks without a run and raced in a field for the first time which prompted the trainers to explore applying blinkers to the colt’s gear.

“We had a good think about it, but ultimately thought no,” Busttin said.

Letzbeglam showed her Blue Diamond credentials with success in the fillies Prelude on February 8 where she sat wide and ran quicker time than the colts and geldings that day.

The stablemates have drawn next to each other in barriers three and four which Busuttin said was ideal.

“The closer to the rail the better for mine,” Busuttin said.

“Letzbeglam is going to get a soft run, she’ll get her chance to lead, but if something wants to come across and go hard from out wide, she can take a sit.

“Tagaloa should be two pairs back from barrier four and get every opportunity.

“Barrier draws win races and we’re certainly a step closer after the draw.”