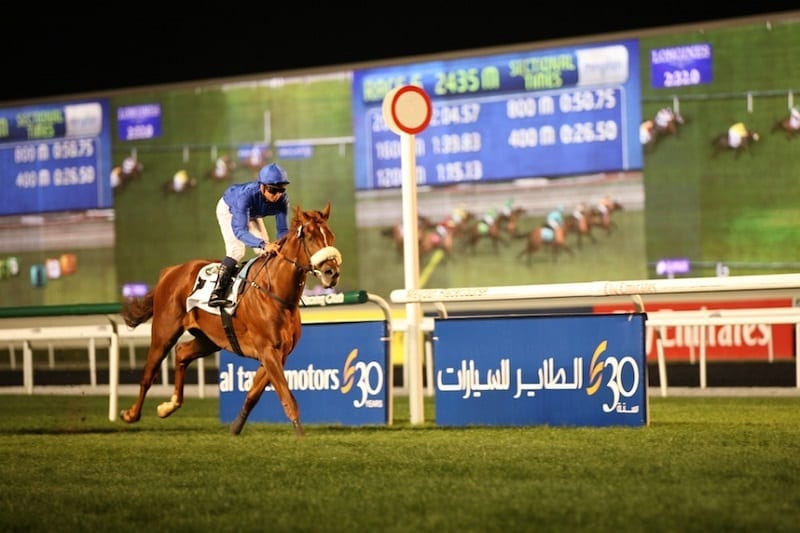 Al Ain stage the biggest race of their season, the 1600m Listed Al Ain Mile, on Friday afternoon with a dozen runners declared for the AED300,000 feature including Brraq, trained on the track by Jean de Roualle and seeking to win for the second consecutive weekend.

Owned by His Highness Sheikh Mansour bin Zayed Al Nahyan, the 6-year-old has an awful lot to find on official ratings, but has only had three starts, easily winning the second, a 1600m maiden on the Abu Dhabi turf in January. Then, almost exactly a month later, last Friday he comfortably landed a 1600m rated conditions stakes at Jebel Ali with Richard Mullen in the saddle for all three starts.

“As I explained at Abu Dhabi and again last week this horse has not been easy to train,” Mullen said.

“We have always thought a lot of him and it testament to Jean and his team that the horse is starting to show what we always believed he is capable of. This is another step up in class, but we hope he is capable of coping with it and at least being competitive.”

De Roualle also saddles Mirna, to be ridden by Adrie de Vries for Yas Horse Racing Management, but seemingly overlooked by Mullen. A 7-year-old mare, she has yet to add to her four career victories in France, but is taking a big drop in grade.

Her most recent victory over 1000m in Ostende was achieved when beating Lou Raynal, in opposition here for Yousif bin Ghilan. 7-year-old Lou Raynal made a winning local debut in a 1000m Al Ain conditions race in early January and has the assistance of champion jockey Tadhg O’Shea, but has struggled in two subsequent outings, most recently over course and distance.

Doug Watson saddles two with RB Madymoiselle, the mount of Sam Hitchcott, joined in the field by Sauternes Al Maury, owned by His Highness Sheikh Hamdan bin Rashid Al Maktoum as is AF Mahshoum, trained by Ali Rashid Al Rayhi. With the owner’s first jockey Jim Crowley not in action because he rides in England on Saturday, Dane O’Neill, also retained by Sheikh Hamdan, has opted to ride Sauternes Al Maury.

Inaugurated in 2014, no horse has landed this race twice, but Aslaan, the 2017 victor, will try and remedy that for Helal Al Alawi and Sheikh Mansour, but is another passed over by Mullen who was aboard for that success two years ago.

For His Highness Sheikh Khalifa bin Zayed Al Nahyan, Eric Lemartinel saddles both Amwaj, the mount of Fabrice Veron and Mukaram, to be ridden by Olivier Doleuze. Representing such powerful connections both merit the utmost respect.

The only Thoroughbred contest is a 1000m handicap which looks typically competitive and has attracted the maximum allowed field of 15.

Jockey bookings would suggest Mullen and Midlander are expected to fare best of four Satish Seemar runners with O’Shea aboard First Down, perhaps second best of the quartet.

Rashed Bouresly has his string in good form, so Atta Alla should not be discounted, along with stable companion Voski should he make the final field; he is currently first reserve.