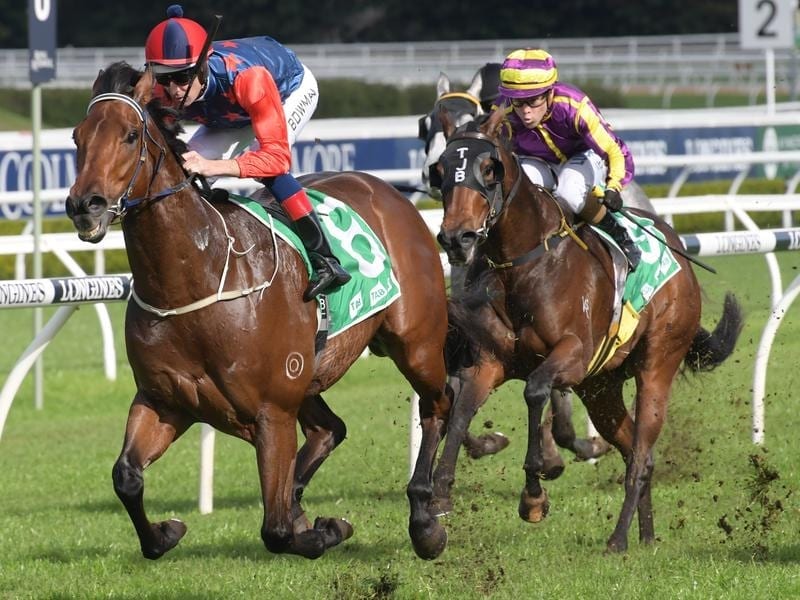 Sir Elton worked hard at both ends of the race to win the Everest Carnival Handicap.

Hugh Bowman has made a perfect return at Randwick with victory aboard exciting sprinter Sir Elton at his first race ride in over two months.

Saturday’s meeting was the first time the champion hoop had ridden in a race since May 1 but Bowman didn’t miss a beat.

After settling Sir Elton outside race leader Embracer, he nursed the three-year-old up the straight before giving him rein to slip away from his rivals and take out the Everest Carnival Handicap (1000m) by two lengths over Gimme Shelter with Dio D’Oro flashing home third another nose away.

Bowman said it was a relief to get the win on a horse who came into the race with a big reputation after two outstanding wins on the provincial circuit.

“It was nice to come back on an odds-on favourite and I suppose the pressure was on to get the job done but the horse has been in fine form,” Bowman said.

“He’s certainly got a fine future judging by what I just felt.”

Trained on the NSW Central Coast by Adam Duggan, Sir Elton was making his metropolitan debut and Bowman was taken by the horse’s ability to adapt to the race as it unfolded.

“What I was so impressed with was the way he went forward, set up a position then came back and relaxed for me well,” Bowman said.

“I think that gives him great scope to get over a little bit further which will open up a lot more doors for him.”

A thrilled Duggan also had no doubt the best was still to come from Sir Elton, praising his effort to work at both ends of the race.

“He didn’t get it all his own way there today,” Duggan said.

“He did a bit of work and it was a good win, I think there’s more to come with him.”