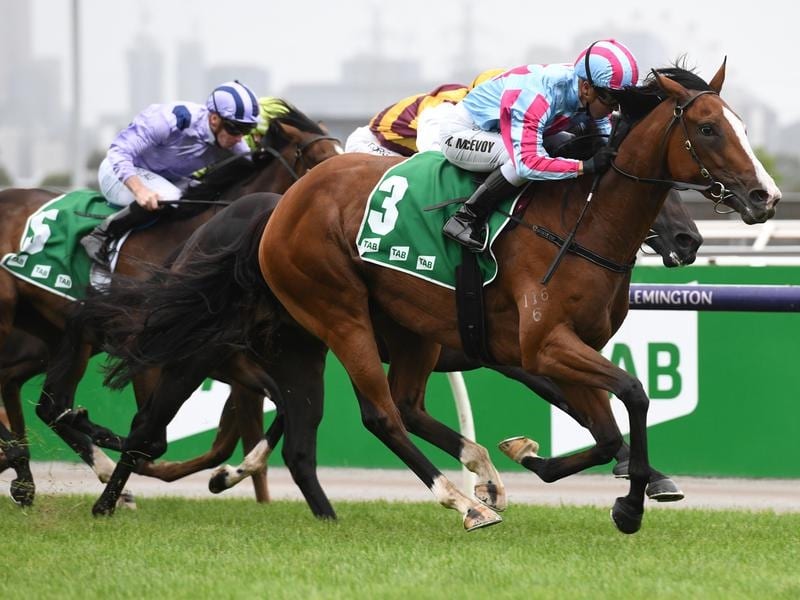 Bonvicini is on track for an autumn Group One campaign after winning first-up at Flemington.

Bonvicini has shown she will be in for a good autumn campaign after a tough first-up win in The Vanity at Flemington.

One of two runners for trainers Ciaron Maher and David Eustace in Saturday’s Group Three race for three-year-old fillies, Bonvicini scored an upset win over 1400m.

Ridden by Kerrin McEvoy, Bonvicini ($26) ran home powerfully to score by a length from Pretty Brazen ($3.60) with Meuse ($8) three-quarters-of-a-length away third.

Maher said he thought both fillies would gain a lot of benefit from their first-up runs on Saturday.

“Both are very similar and I thought this run would bring them on as they both will get out over a bit of ground, a mile to 2000 (metres),” Maher said.

“This horse I thought would appreciate the cut in the track, the breed really like it.

“I thought she might have peaked on her run but she’s got a beautiful action that she used through the line.”

The trainer gave owner and breeder Greg Perry a shout-out following the race after issuing the riding instructions for the mare.

“He said make sure you ride her back and cold and let her finish on,” Maher said.

“And I think that was the key. She enjoyed that and flowed into the race under a great ride by Kerrin.”

Maher joked he may need to head overseas to locate Bonvicini’s sire Myboycharlie and bring him back to Australia.

Myboycharlie also sired Jameka, a three-time Group One winner including the Caulfield Cup for Maher in 2016.

“I’m quite fond of training them,” he said.