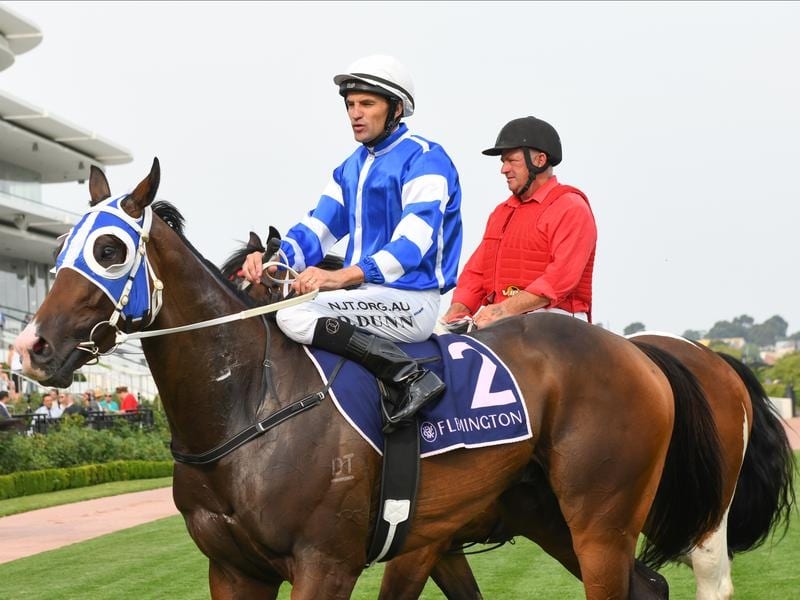 Bold Star will be on trial for a step up to Group One company when he contests the Rubiton Stakes.

Adelaide trainer Gordon Richards is raising the bar again with progressive sprinter Bold Star who could earn a crack at the Group One Oakleigh Plate if he steps up in the Rubiton Stakes at Caulfield.

Bold Star has done all of his racing in Melbourne during his current campaign, notching three wins and a second with his most recent victory his first at stakes level in the Listed Kensington Stakes (1000m) at Flemington on January 18.

The four-year-old gelding will be brought to Melbourne from Richards’ Adelaide base again on Thursday night to run in Saturday’s Group Two Rubiton (1100m), aiming to add to his record of seven wins from 17 starts.

“He just keeps stepping up the next level all the time, which is pretty good.”

Bold Star began this preparation with a fast-finishing win in a 955m race at The Valley in November before winning a 1000m benchmark-84 at Flemington a month later.

Richards believes the gelding was probably a victim of being on the wrong side of the track when the field split into two in the Group Three Standish Handicap down the Flemington straight 1200m when he was beaten by Oakleigh Plate-bound Halvorsen on January 1.

“He then won the Kensington, albeit it was a farcically run race but he was still good enough to stick his head out so he deserves his chance,” Richards said.

“With the (Group One) Lightning Stakes the week after and the Oakleigh Plate the week after that, I thought the Rubiton was probably going to be not quite the top quality sprinters. Even though it’s set weights and penalties the opposition is about what he’s capable of beating.”

Bold Star was $6 in an early market on Wednesday with three-year-old filly Anaheed $4.80 favourite just ahead of dual Group One placegetter Age Of Chivalry in the field of 10.

“There’s a couple of quick horses in it which is going to suit him because he likes the pace on and there’s a few 1400-metre to mile horses resuming and they can always run well fresh,” Richards said.

“But I think he has got to be amongst them again.”

Richards said if Bold Star was to run well over the Caulfield 1100m on Saturday it would be silly not to press on to have a crack at the Oakleigh Plate over the same course and distance two weeks later.