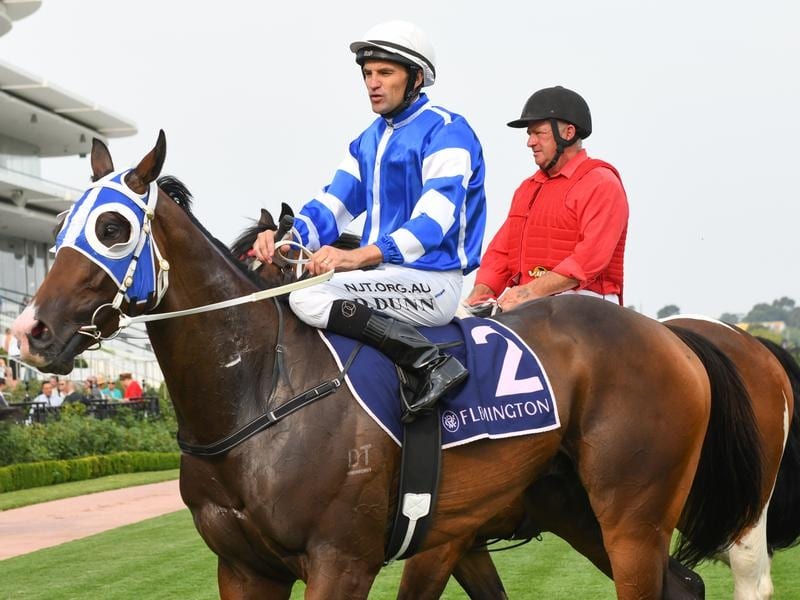 Progressive South Australian sprinter Bold Star has made a habit of winning in Melbourne this campaign and the gelding has done so again to land his first stakes win at Flemington.

Bold Star’s narrow victory in Saturday’s Listed Kensington Stakes (1000m) was the four-year-old gelding’s third win in Melbourne from four starts this preparation, with his only blemish a second in the Group Three Standish Handicap at Flemington at his previous start.

Trained at Morphettville by Gordon Richards, who has had six winners from 11 starters in Melbourne this season, Bold Star was sent out the $2.80 equal favourite and was able to nab $21 outsider Causeway Girl right on the line to score by a nose, with All To Royal a half-head away third in the field of five.

He could now be aimed towards the Group One Goodwood in Adelaide on his home track later in the season.

“It was a good effort today,” jockey Dwayne Dunn said.

“He’s been up for a long time and the other day he got to the front in the Standish and thought his job was done but the horse on the inside section (Halvorsen) beat him.

“Gordon has done a good job with him. He has been back and forwards between Adelaide and here, and Gordon has placed him really well.

“He’s just climbing through his grades.”

Dunn knew he had managed to get the better of All Too Royal on his outside but was unsure whether Bold Star had grabbed Causeway Girl on the line after the mare had sprinted through closer to the inside rail.

“I wasn’t sure but I’m happy to take the win,” Dunn said.

Last year’s Group Two Silver Slipper-winning colt Time To Reign ($2.80) was beaten just under one length in fourth after leading.

It was his first start since his fifth placing in the Golden Slipper last March and trainer Gary Portelli felt he might have just lacked race fitness but still fought on well.

“When the pressure came on, he tried to go with them,” Portelli said.

“I think they got that length on him and he just couldn’t get it back. I think he was just a bit rusty.”