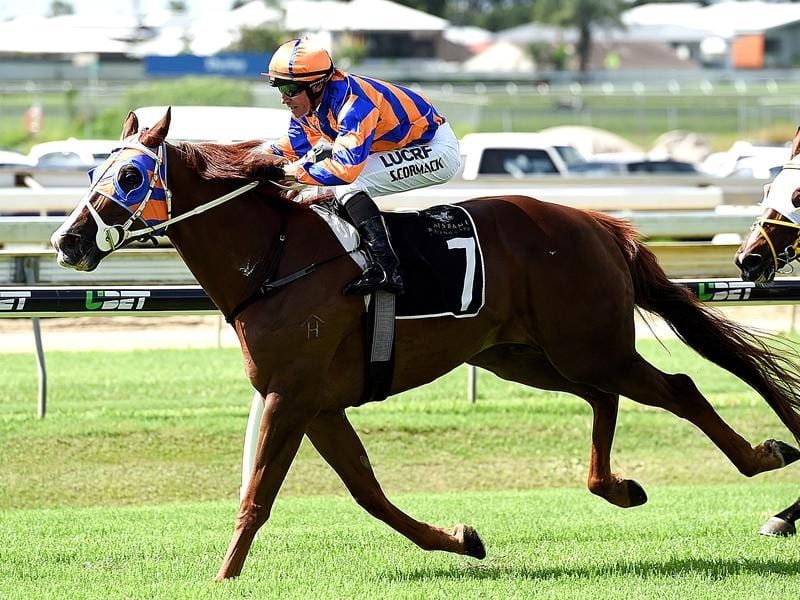 Veteran galloper Bodega Negra will bring up a century of race starts when he runs at Eagle Farm.

War horse Bodega Negra will join a small club when he runs his 100th race on Saturday and trainer Bruce Hill is hoping it will be on the gelding’s preferred wet surface.

On a dry track Bodega Negra would be one of the outsiders in the Canadian Club Handicap (1600m) at Eagle Farm.

However, on a wet track it would be a different story as the gelding has a history of improving lengths in rain-affected going.

The weather forecast is in Bodega Negra’s favour with up to 150mm tipped to fall in southeast Queensland this week.

On the down side for the gelding, Eagle Farm is now one of the best drying tracks in Australia.

Last month the track was soaked with 50mm of rain and the next day horses were running record times.

Bodega Negra won the South Grafton Cup and the Sawtell Cup in July but has since been hampered by a run of firm and good tracks.

Hill hopes at the worst for Bodega Negra the sting will be out of the track on Saturday.

“He will run provided there is some rain and they are predicting it,” Hill said.

“But we all know the predictions don’t always come true.

“I would love a bog track for him and it would be great for his 100th run.

“But a softish track would even do as any give is a bonus.”

Hill has a lot of time for Bodega Negra who he part-owns with Rob Willis and Michael Buys.

“Bodega Negra is just a lovely old horse. He loves his work and he is a pleasure to have around the stables,” Hill said.

“I know a lot of trainers say it about their horses but I genuinely would love to have a stable full of horses like him.”

Bodega Negra has been racing for seven seasons since he ran fourth at his first start at the Sunshine Coast in August, 2013.

He has raced on 14 different tracks in Queensland and NSW and has contested 15 stakes races.

He has won four races on good tracks but his wet track record is far superior with seven wins.