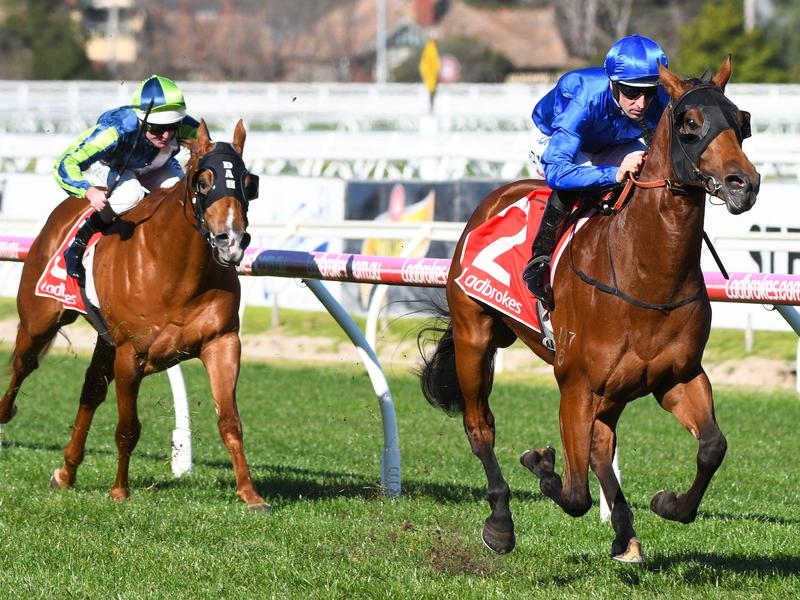 Bivouac has treated his Vain Stakes rivals with contempt to win the Group Three race at Caulfield.

Exciting colt Bivouac has made an early-season statement with a dominant win in the Group Three Vain Stakes at Caulfield.

The James Cummings-trained Bivouac only had five rivals in his season return in Saturday’s 1100m sprint for three-year-old colts and geldings but left them in his wake in the final 200m to win by 4-1/4-lengths.

“He’s got a good record. I know the stable feels that he has progressed since his two-year-old season and that was shown today.

“He’s certainly got better things in store in the coming months. We expected a good performance and it was no surprise to see him win the way he did. But it certainly gives us satisfaction that he did do it.”

Bivouac won two of his five starts as a two-year-old.

He missed out on a Golden Slipper start when he was first emergency in March before capping his juvenile season with victory in the Group Three Kindergarten Stakes at Randwick in April.

Bivouac was making his first Melbourne appearance on Saturday and Bowman said things panned out nicely for the $3 favourite, sitting in behind the leaders before being able to angle into the clear rounding the home turn.

After looming up to hit the front at the 200m, Bivouac let down strongly to race clear of runner-up Sebrakate, with Dirty Work another 1-3/4-lengths away third.

“It’s early in the spring and he’s going to find better opposition in the coming months,” Bowman said.

“We won’t get too carried away but he’s certainly a nice horse.”