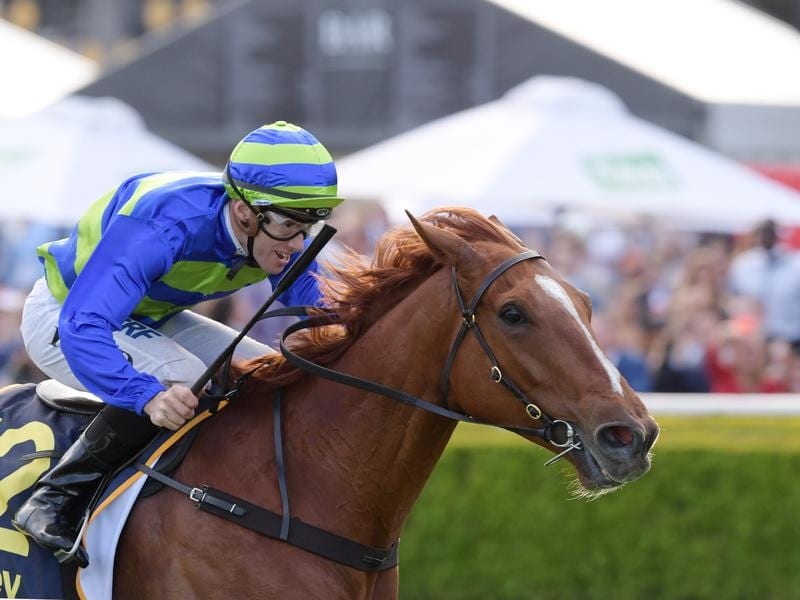 Trainers Ciaron Maher and David Eustace are looking forward to their first foray at international jumps racing with Big Blue aimed at the Cheltenham Festival.

Big Blue leaves for England on Wednesday and will be based at Lambourn under the watchful eye of Maher-Eustace stable employee Sarah Webster.

The Cheltenham Festival is a four-day jumps meeting in March with the opening day in 2019 attracting a crowd of almost 68,000.

Eustace, formerly based at Newmarket before coming to Australia, said it was exciting to think the stable would have a runner at the festival.

“It will be fascinating to see how we go,” Eustace said.

“We’ll stay at Lambourn. There’s a lot of flat trainers there but it’s a jumps training base and we’ll stay with Philip Mitchell who used to be a trainer there.

“Sarah will be in charge. She’s worked in Lambourn before, knows the place, so that will be extremely helpful.”

Big Blue did his early racing in France before Godolphin brought him to Australia, but after six runs he was bought by Maher.

At his first start for Maher, Big Blue won a Ballarat hurdle by 10 lengths and two starts later won the St Leger Stakes (2600m) at Randwick.

Big Blue has had two starts over jumps this year, running second at Pakenham before winning the Galleywood Hurdle at Warrnambool in May.

He had three flat runs during the spring, finishing a last-start third over 2800m at Flemington on November 5.

Eustace said there were no set plans or target races for Big Blue.

“It will all depend on what handicap mark he gets and we’ll be guided by that,” Eustace said.

“Whether he goes to the handicap races or the jumps graded racing which are weight-for-age or at set weights, we’ll work that out when he gets there.”