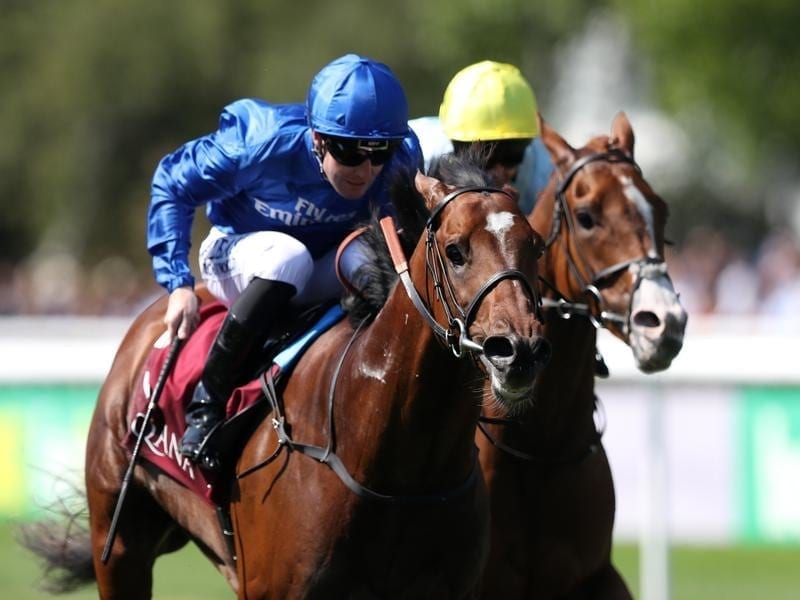 Best Solution (blue) has set up a possible Melbourne Cup tilt with his Group Two win at Newmarket.

Best Solution has taken a step to a possible Melbourne Cup campaign with victory in the Princess of Wales’s Stakes at Newmarket.

Last seen finishing fifth in the Dubai Sheema Classic behind Hawkbill, the Saeed bin Suroor-trained Best Solution ran saw the 2400 metres out strongly as he held off the determined challenge from Mirage Dancer.

“I’m always looking for Group One winners, but Group Twos are all right,” Saeed said.

“After he was fifth in the Sheema Classic, we talked to Sheikh Mohammed and said we would give him a bit of time.

“I was just talking to Sheikh Mohammed and it will be the King George or the Irish St Leger (next).

“I’m looking for Group One options overseas in the future. We could also take him to Australia for the Melbourne Cup. Mile-and-a-quarter/mile-and a-half horses run well in that.”

Andrew Balding could also look at the Melbourne Cup for third-placed Duretto.

“He’s run a really good race and we will have to look at our Australian options now and work back from that.

“The intention was to win a nice race here (in Europe) and then go to Melbourne. It is an expensive trip and we want to make sure we have the horse of the right sort of calibre, which he seems to be.

“We’ll work back, and he’ll probably have one more run in Europe beforehand.”