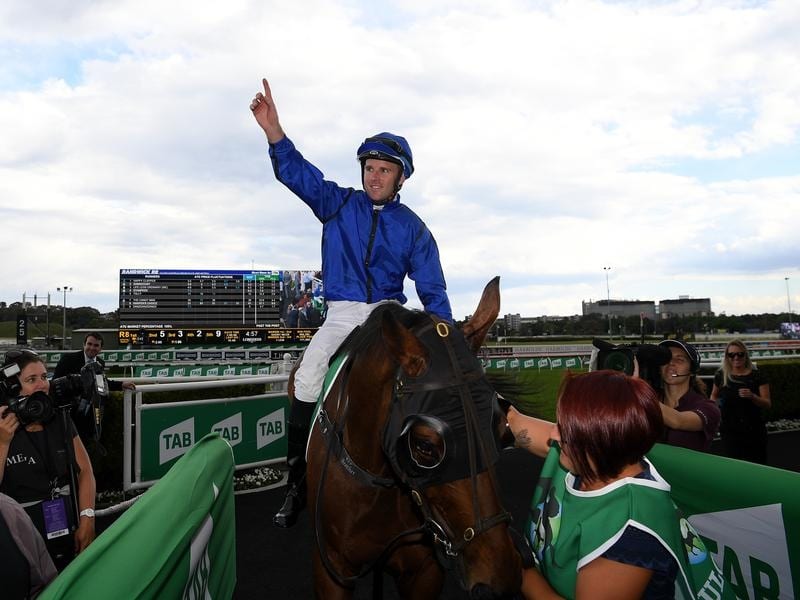 Tommy Berry earned all the plaudits after winning on popular veteran Happy Clapper at Randwick.

A mid-race move by Tommy Berry to take Happy Clapper to the front has proved a masterstroke, although it gave trainer Pat Webster a few heart palpitations.

Expected Craven Plate leader, the Bjorn Baker-trained Samadoubt, couldn’t muster early speed, leaving Stampede to enjoy a soft lead so Berry took matters into his own hands on the $3.70 favourite.

He took Happy Clapper to the front halfway through the 2000 metres race in a move Webster admits was not part of any plan.

“I said to Bjorn Baker, ‘don’t worry about the speed, we’ll be making it’ but I was only joking,” Webster said.

“I didn’t think when he took off like that, he could keep going.

“You go back to the Roy Higgins and George Moore days when your weight-for-age races were always about tactics.

“Today this is weight-for-age and Tommy Berry did everything I didn’t expect him to do.”

One of the most popular horses in training, Happy Clapper’s class shone through and he had enough in reserve to hold Tally ($13) at bay by a short neck with another length to Life Less Ordinary ($6.50).

In winning, Happy Clapper took his prize money past $7 million, leaving Webster in awe of the nine-year-old’s wonderful career which has included several battles with champion Winx.

“The Epsom, the Doncaster and now this. What can I say?”

Happy Clapper is likely to be aimed at the $1 million The Gong at the stand-alone Saturday meeting at Kembla Grange on November 23.