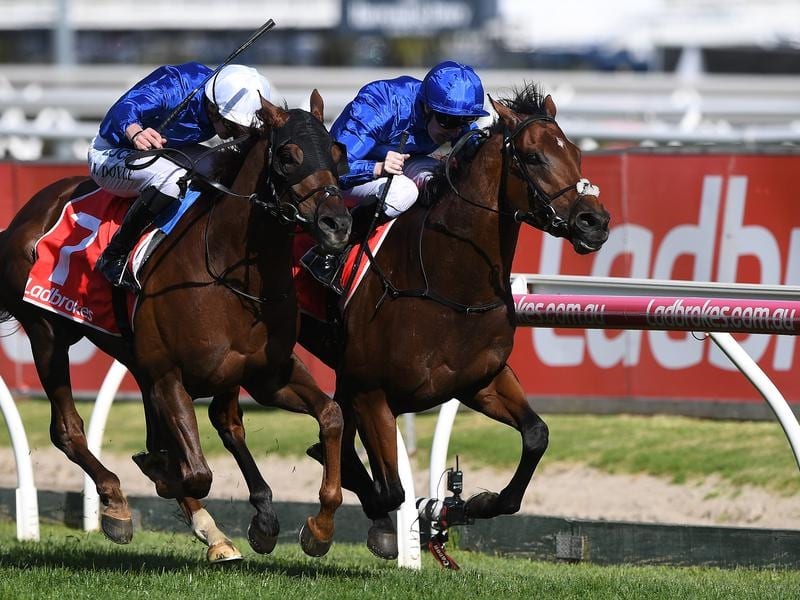 2018 Caulfiield Stakes winner Benbatl (r) has made a winning return in a Group 2 race at Meydan.

Multiple Group One winner Benbatl has outclassed his rivals on his return to action at Meydan in the Singspiel Stakes.

Saeed bin Suroor’s stable star won the Dubai Turf, the Grosser Dallmayr Preis in Germany and Caulfield Stakes in Australia in a stellar 2018 which he rounded off with a second to Winx in the Cox Plate.

Last season was not so straightforward for Benbatl, as he did not reappear until September – and while he looked as good as ever when he returned to win at Newmarket, he floundered in the mud when favourite for the QEII at Ascot.

Making his first competitive appearance in Thursday’s Group Two race in Dubai since finishing last of 16 runners on Champions Day, the six-year-old was the 1-8 favourite.

Benbatl was soon bowling along in front in the hands of Christophe Soumillon and the result was scarcely in doubt as he readily extended clear for a facile success.

“He ran really well and I’m happy with him,” bin Suroor said.

“He showed plenty of speed tonight. He was in front all the way and was travelling really good.

“There was a little question mark about the ground, but the way he finished off the race was really good.”

The obvious target for Benbatl would be for him to try to regain his Dubai Turf crown on World Cup night, but his trainer was non-committal.

“We’ll keep the options open for him for the future. He was around 90 per cent fit and he will improve from this race,” bin Suroor said.

“That (Dubai Turf) could be an option, we’ll leave it (a decision) until later.”

Bin Suroor had a double at the meeting with fellow English-based Godolphin trainer Charlie Appleby also coming away with two wins.