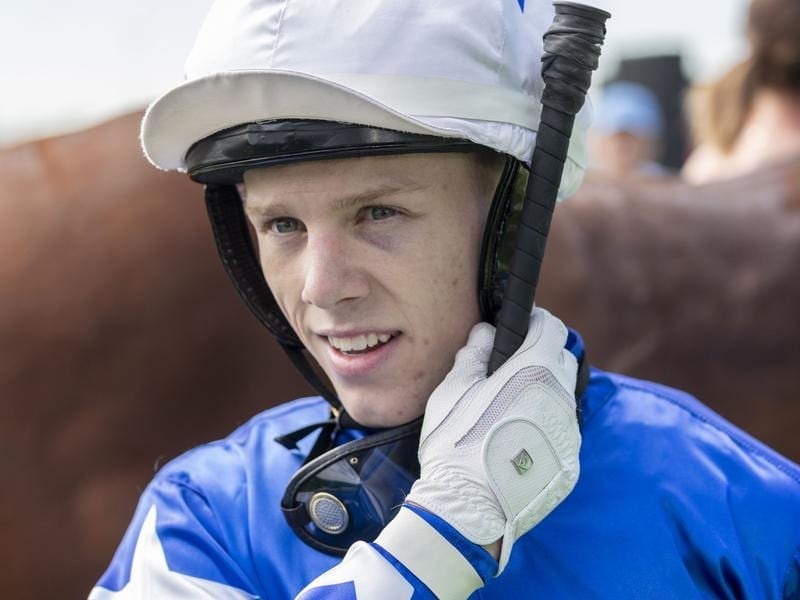 Apprentice jockey Corey Bayliss will ride Shogun Sun in the 1600m race at Doomben on Saturday.

Trainer Kelly Schweida has booked claiming apprentice Corey Bayliss to give Shogun Sun every chance to run a strong 1600 metres at Doomben on Saturday.

Shogun Sun will have his second run at 1600m in Saturday’s Class Six at Doomben and was given 59.5kg.

Bayliss’s 2kg claim gets him into the race well at the weights against his key rivals.

The gelding has earned his big weight and is by far the highest rated horse in the race on 87.

In his other start at 1600m, Shogun Sun was second at Eagle Farm in March when he carried 56kg.

Schweida said he only elected to step Shogun Sun up to 1600m after he was forced to scratch him from the Listed Glasshouse Handicap because of a heavy Sunshine Coast track last week.

“There just wasn’t anything else in his distance range this week and he needs to run,” Schweida said.

“He hasn’t been disgraced in some much better races during the winter. This race is obviously weaker but with Corey’s two kilo claim it should give him an extra tick.”

Shogun Sun has not won since August last year but has been placed five times in the minors, including a third in the Magic Millions Cup in January.

Bayliss has had limited opportunities in metropolitan races in the winter carnival but has seven rides on Saturday, including Amanaat, the favourite in the Open Handicap.

Bayliss has also been rewarded for his recent win on Grafton Cup-bound Sacred Day with the ride on stablemate Cyber Attack in the Three-Year-Old Handicap.

“It has been a good winter with two Group Ones and more than $1 million in prize money,” he said.

“It would be great to end the carnival with another Doomben winner and then if we can repeat that with Sacred Day in the Grafton Cup.”