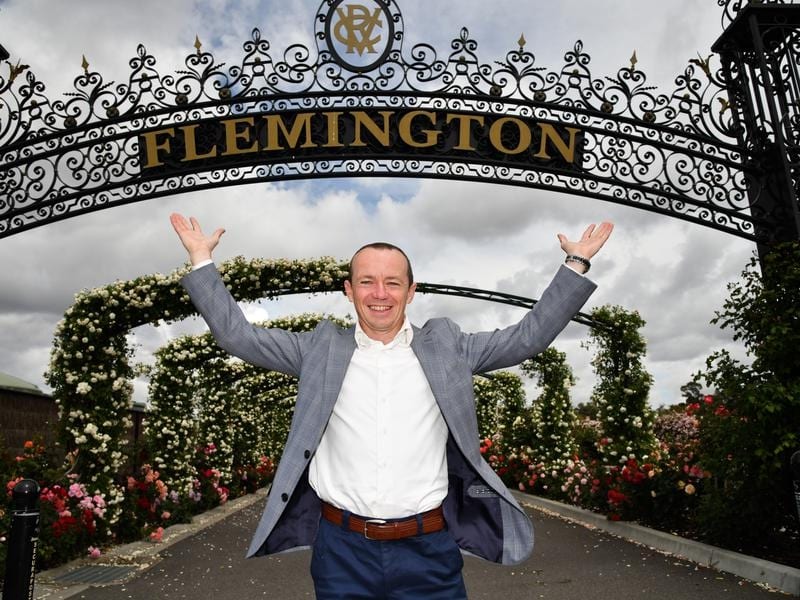 Stephen Baster will ride at Flemington for the last time on the final day of the Cup carnival.

As retirement looms for Stephen Baster his final rides have a personal connection.

Baster has two rides to finish the Melbourne Cup carnival on Saturday while his final meeting comes the following week at Sandown.

He rides Boxachocolates for Stephen Brown in Saturday’s Cup Week Radio Trophy while his final Flemington ride is on Scarlet Dream in the Group Two Matriarch Stakes, for part-owner Stan Saric.

Brown was instrumental in getting Baster to Caulfield as an apprentice with Mark Riley while Saric part-owned Awesome Rock who Baster rode to win the 2016 Mackinnon Stakes, Saturday’s feature race.

“I’ve got two quite personal rides tomorrow then three the following Saturday, one for Logan McGill, who was apprenticed to Mark Riley, one for Gai Waterhouse and Adrian Bott and one for Leon Corstens,” Baster said.

“They’re all tugging at the heart strings every ride I’ve got left but it’s a good way to finish.”

As chairman of the Victorian Jockeys’ Association, Baster believes he leaves the racing industry in a good state.

Baster said the apprentice jockeys coming through the ranks were much better educated than in his day.

“Back when I was an apprentice we would have school once a week and Mrs King would give us a cup of tea and a few biscuits and we’d all play up for the hour,” Baster said.

“The kids now, when they start, they’re probably as good a rider as I was six or seven years in.

“Their professionalism has gone through the roof.”

Baster is biased when he talks of programs Racing Victoria has implemented for jockeys including welfare, medical care and plastic running rails.

But it is not a career he wants his young daughters to take up.

“It’s fun doing it yourself but I don’t think I could watch them go around,” Baster said.

“I’m on the Jockeys’ Association and with the National Jockeys’ Trust we see a lot that struggle with bad accidents.

“It’s a dangerous sport and one you’ve got to love but I’d like my little babies not to do it.”

Baster begins work with a Mornington real estate company on Monday week and sees a crossover between the two.

“I guess you’re in a service industry,” he said.

“You’re helping people with their family homes or their investments while with horses it’s also personal because people put so much money in.

“You’ve got to be professional and work hard and I enjoy working with different people.”