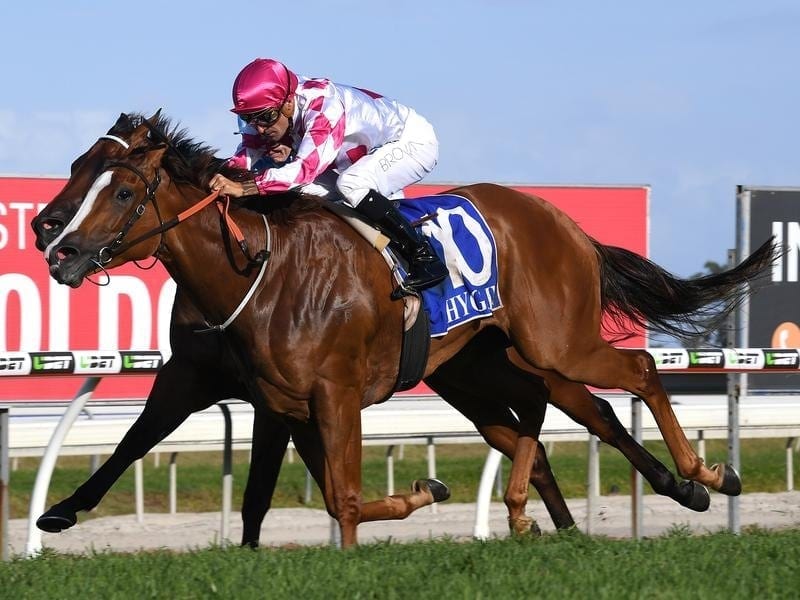 Champagne Cuddles remains at the top of Stradbroke Hcp betting at $4.60.

Warwick Farm trainer Bjorn Baker believes things have fallen into place for three-year-old Champagne Cuddles to give him another Queensland feature win in the Group One Stradbroke Hcp.

Queensland has been a happy hunting ground for Baker who won the 2014 Magic Millions Two Year Old Classic with Unencumbered and 2015 Doomben 10,000 with Music Magnate.

Champagne Cuddles has been near the top of the Stradbroke markets since winning the Gold Coast Guineas (1200m) in course record time on May 5.

Baker surprised many when he elected to take on weight for age company with her in the Group One Kingsford Smith Cup rather than the Fred Best Classic against her own age group on May 26.

But the filly proved him correct when she came from well back to finish third behind hardened weight for age performers Impending and Le Romain.

“The run showed us she was up to the weight for age horses. She is back in a handicap with only 50kgs,” Baker said.

“It gave her a chance to have a look at Doomben and also the 1350m at that track.”

Baker said Champagne Cuddles would be a lot closer in the run from barrier one.

“I would rather draw barrier one than 16. She will go forward on Saturday and have the sitting shot at them late.

“Corey Brown has shown what he thinks of her by getting down to 50kgs to ride her. Three-year-old fillies with a light weight in the Stradbroke have a good record. So you could say things are falling into place.”

Champagne Cuddles remains atop the betting at $4.60.