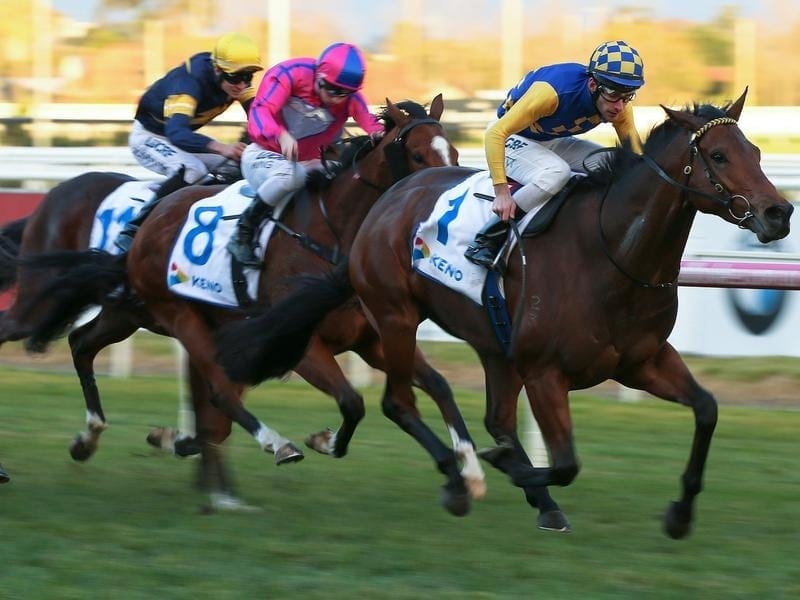 Ashlor will be kept to 1100 metres for the time being and run in the Sir John Monash Stakes.

Trainer Dan McCarthy has opted to keep Ashlor to shorter distances for the time being, with the Group Three Sir John Monash Stakes the gelding’s next target.

Ashlor carried 63kg to victory last Saturday week in a 1200m-benchmark race at Caulfield and McCarthy flagged his intention to stretch the four-year-old out to 1400m.

But after studying the program, McCarthy believes the best path is for Ashlor to run in Saturday’s weight-for-age Monash Stakes over 1100m with a view to stepping up to 1400m for the first time next month.

McCarthy plans to have a crack at the Group Two P B Lawrence Stakes (1400m) with Ashlor in mid-August and hopefully the Group One Memsie Stakes over the same distance at Caulfield two weeks later.

He said stepping up to 1400m in Saturday’s open handicap, for which Ashlor is also nominated, would have presented programming challenges to get to those races.

Instead, Ashlor is scheduled to run in the Monash and the Bletchingly Stakes (1200m) two weeks later.

“I’m really keen to string him out in distance but at the same time programming-wise it just doesn’t work right at the moment,” McCarthy said.

“He has done a treat since his last start win so there’s certainly no issues with him staying at sprint distances.”

Jamie Mott, who rode Ashlor to victory last start, retains the ride in the Monash which has attracted 16 nominations including dual Group One placegetter Voodoo Lad and Group-winning colt Jukebox.

Ashlor’s only previous attempt at stakes level was a fifth in last year’s Group Two Euclase Stakes (1200m) for three-year-olds in Adelaide iin which he had a tough run.

“With a bit better run that day I’m sure he would already be a Group Two winner,” McCarthy said.

“I don’t hold too many concerns with him in that sort of class.”

He believes the most important thing is a good barrier as Ashlor had last time so the four-year-old can get the right run with cover.

“Hopefully we can draw a good barrier again and just get some cover and do something similar,” he said.

“He seems every bit as well as what he was heading into his last run.”