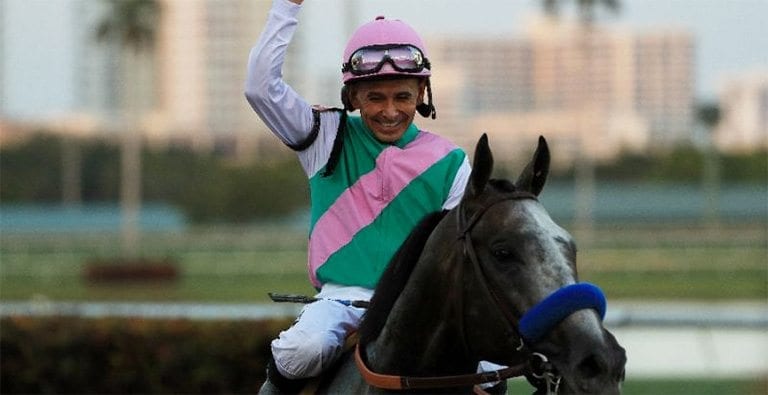 AMERICAN superstar of the turf Arrogate confirmed its status as the best horse on the planet after dominating the field in the Group 1 Pegasus World Cup at Gulfstream Park.

The US$7 million Pegasus was meant to be a glorified match race between Arrogate ($2 at WilliamHill.com.au) and the two-time American horse of the year California Chrome ($2.30 via Crownbet.com.au), but the latter fell away badly midway through the race and did not feature in the finish.

Shaman Ghost ($2.90 at WilliamHill.com.au) and Neolithic ($3 at Sportsbet.com.au) stayed on well to claim the minor placings but never mounted a realistic winning challenge.

It was a disappointing end to the racing career of California Chrome.

The retiring great jumped well from gate 12 but long-time mount Victor Espinoza failed to truly slot in after getting caught four-wide on the first turn.

Chrome was pushed along well before the turn into the straight and it was clear the horse was not going to mount a challenge to the smooth-moving Arrogate, which bided its time and torched the field as it entered the home stretch.

The team behind the retiring great were at a loss for words as to why the champ put in such a poor performance in the aftermath of the race.

“He didn’t break as sharp as he usually does, then he got hung up so wide, but down the backside he didn’t have any excuses.”

“He looked like he was listless, I don’t know why.”

Sherman said the Pegasus was one of the lowlights in California Chrome’s glittering career.

“This is the first bad race he’s ever run for me.”

Even at its peak however, there is no guarantee as to whether even the great California Chrome could have matched Arrogate today.

As the horses cornered in for the judge the Bob Baffert-trained stallion was already gapping the field and only extended that margin as the post drew near.

Winning jockey Mike Smith said he knew early in the race that California Chrome would not present a challenge midway through the race.

“I looked halfway down the backside and I saw (California Chrome’s jockey Victor Espinoza) having the nudge it on Chrome a little and I said ‘maybe he ain’t there today’” Smith said.

“He (Espionza) had me right where he wanted me, but Chrome just didn’t fire his race today at all,

“Believe me, that’s not the Chrome I know.”

The win for Arrogate further solidifies the stallion’s legend after taking out the Breeders’ Cup in 2016.

Arrogate’s trainer Bob Baffert said while he is disappointed his horse’s main rival could not find its best on the big stage, Arrogate justified favouritism in the world’s richest thoroughbred race.

“What a superior horse he is,” Baffert said.

“I feel bad about California Chrome, he just didn’t bring his race today so that match up never came about.”