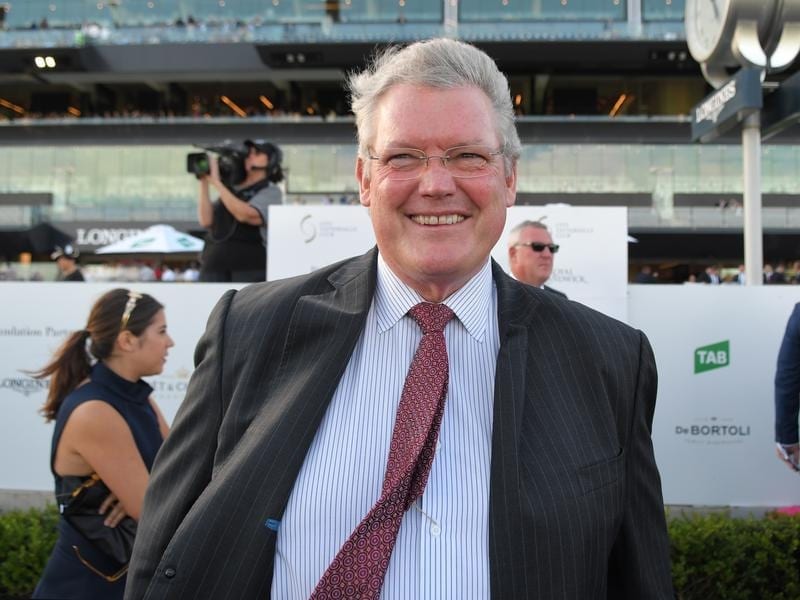 Anthony Cummings, the co-trainer of Sky Boy, is hoping he can bring up a hat-trick at Rosehill.

Sky Boy represents a link to the past for Anthony Cummings but the trainer is hoping the horse can also be a foundation for the stable’s future.

The four-year-old was owned by the late Dato Tan Chin Nam who won four Melbourne Cups with Cummings’ father Bart and was a long-time supporter of the entire Cummings family.

The gelding is by Pendragon who stands at Dato Tan’s Think Big Stud named for his dual Melbourne Cup winner.

“He was the last winner Chin Nam had while he was still alive and with a bit of luck he’ll keep on in the same vein,” Cummings said.

Sky Boy will chase a hat-trick of wins in the Australian Turf Club Handicap (2000m) before being freshened for a tilt at the Villiers Stakes during the summer.

Cummings, who now works in partnership with his son Edward, hopes the horse represents the start of a new era following a quieter period spent recalibrating their operation.

“Things are getting better and we’ve got some nice horses there,” Cummings said.

“We had to clear the decks a bit, clear a few of the horses out that were around and weren’t quite what we would have hoped, and right now we’re doing OK.”

Cummings will also saddle up three-year-old Baller who comes to town following a dominant debut win at Kembla Grange.

He was sent out a $61 chance that day but Cummings wasn’t surprised by the performance.

“It wasn’t unexpected. I actually had an interview that race morning and I said to them I had three promising horses going to the races and any one of them, if not all of them, were capable of winning,” Cummings said.

“I think it’s relevant when they carry weight and can run 1:10 and change at their first race start. Not many slow horses can do that.”

Apprentice Robbie Dolan, who is indentured to Mark Newnham, has his first ride for the Cummings stable on Baller.

Dolan has impressed Cummings from afar and with many of Sydney’s top jockeys riding in Melbourne, Cummings felt it was a good time to give the young rider an opportunity.