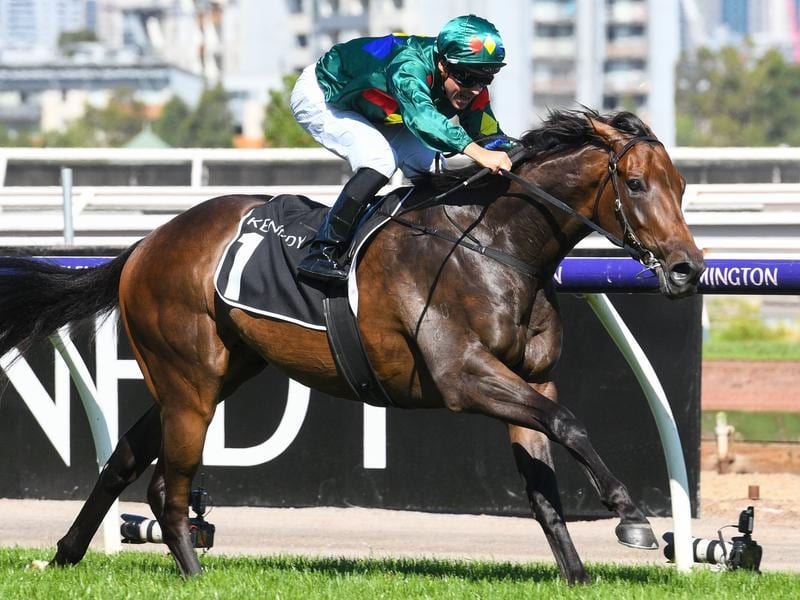 Alligator Blood recorded a 1-1/4 length win from Superstorm in the Group One Australian Guineas.

The two keys players in the success of Alligator Blood say the world is his oyster after the gelding scored a courageous victory the Australian Guineas at Flemington.

Trainer David Vandyke and jockey Ryan Maloney echoed each others comments after Alligator Blood withstood being taken on early in Saturday’s Group One race before putting the race beyond doubt early in the straight.

It was the first Group One win for Alligator Blood after being denied victory in the Caulfield Guineas (1600m) last spring when run down by Super Seth.

That defeat was the only time Alligator Blood has been beaten in an 11-start career that sees his prize money now totalling more than $2.8 million.

Vandyke said he has goosebumps talking about the horse.

“He’s been up since last May, he’s had a race or a trial every month since July and the longest break he has had is nine days.

“He then has the audacity to put in a career best performance with that long, drawn out preparation.

“That’s a good as it gets, the world’s his oyster.”

Vandyke said Alligator Blood’s victory in the Magic Millions Guineas at the Gold Coast in January was redemption for the Caulfield Guineas defeat.

“But to win a Group One like that, it is more than redemption, it’s a dream come true,” he said.

Alligator Blood is the $3 favourite for the All-Star Mile (1600m) at Caulfield on March 14, although Vandyke said a start was dependant on the gelding’s recovery from Saturday’s win.

“If I think there is any shadow of doubt after that amazing performance we’ll tuck him away,” Vandyke said.

“I’d love to have a runner in the All-Star Mile, I’d love him to be there after that performance, but the horse comes first.”

Maloney, 34, a former Victorian who has been based in Queensland for 18 months, landed his first Group One success, describing Alligator Blood as a horse of a lifetime.

He said after being softened early Alligator Blood was dominant at the finish.

“I was a little worried as I knew Catalyst and Alabama Express were going to be getting the profit, but there was no way I could let Commodus cross me,” Maloney said.

“But I only had to use my melon in the first furlong, the rest was all him.

“If you had of told my when I left that this would have happened, I would have laughed.”

The expected match race between Alligator Blood and sixth-placed Catalyst ($3.40), who staged a classic duel in the CS Hayes Stakes a fortnight earlier, failed to eventuate.

Catalyst’s New Zealand trainer Clayton Chipperfield said the race did not pan out as he expected and that blinkers may be reapplied if they decided to press on to the All-Star Mile.

“With a bit of luck in the All-Star Mile against the older horses it might be a truly run mile,” Chipperfield said.

“We’ll see how he pulls up as he’s a better horse than that.”