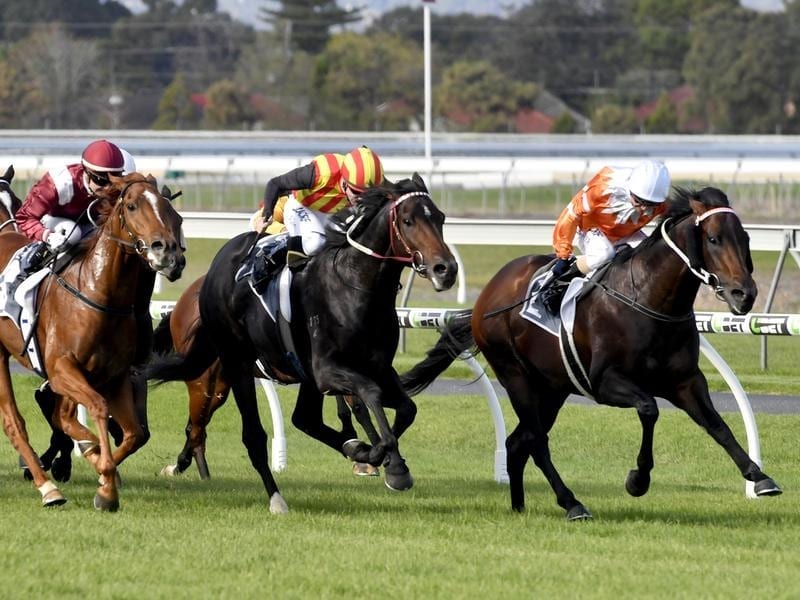 Peaceful State (centre) can give young rider Ben Allen a first Group One win in the Railway Stakes.

Leading Melbourne apprentice Ben Allen will head west in a bid for his first Group One win aboard one of the main Railway Stakes contenders, Peaceful State.

The teenager has had four placings at Group One level during his career.

Allen rode the Darren Weir-trained Peaceful State to third in the recent Group One Kennedy Mile at Flemington during the Melbourne Cup carnival and he believes the four-year-old looms as one of the main chances in Saturday’s 1600m-handicap at Ascot.

“He’s going well so it’s not like I’m going over there for a rough chance,” Allen said.

“If he gets the right run and if he shows the turn of foot that he can produce, he’ll be right up there I reckon.”

Peaceful State has barrier four in the field of 15 while the favourite, who Allen rates as the main horse to beat, is set to jump from barrier two.

“I was happy with his gate and I was happy to see the favourite has drawn in so it will need a pretty good ride from William Pike to get through,” he said.

Allen was hoping for a strong tempo and luck in running to allow Peaceful State to build momentum and charge late.

The 19-year-old has only ridden at Ascot once before when he competed in an apprentices race in April, 2016.

He had six rides that day for one win and four placings.

His book of rides on Saturday also includes Junipal for Weir in the Group Two WA Guineas while local trainer Simon Miller has booked him for three rides.

Weir also has Iconoclasm in the Railway to be ridden by Craig Williams who has won the race twice on Gathering in 2010 and Good Project in 2015.